Shire of Isis facts for kids

The Shire of Isis was a local government area located in the Wide Bay–Burnett region of Queensland, Australia, to the south of Bundaberg. The Shire, administered from the town of Childers covered an area of 1,702.2 square kilometres (657.2 sq mi), and existed as a local government entity from 1887 until 2008, when it was amalgamated with the City of Bundaberg and the Shires of Burnett and Kolan to form the Bundaberg Region. 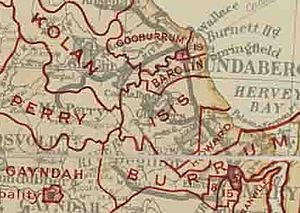 The Isis Division was established on 1 January 1887 under the Divisional Boards Act 1887, on land previously part of the Burrum Division.

With the passage of the Local Authorities Act 1902, Isis Division became the Shire of Isis on 31 March 1903.

On 15 March 2008, under the Local Government (Reform Implementation) Act 2007 passed by the Parliament of Queensland on 10 August 2007, the Shire of Isis merged with the City of Bundaberg and the Shires of Burnett and Kolan to form the Bundaberg Region.

The Shire of Isis included the following settlements:

All content from Kiddle encyclopedia articles (including the article images and facts) can be freely used under Attribution-ShareAlike license, unless stated otherwise. Cite this article:
Shire of Isis Facts for Kids. Kiddle Encyclopedia.