Shire of Woocoo facts for kids 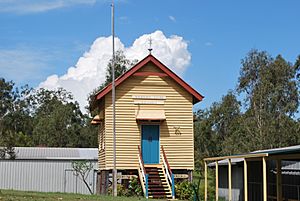 The Shire of Woocoo was a local government area located in the Wide Bay–Burnett region of Queensland, Australia, containing the rural residential area to the west of the town of Maryborough, and surrounding countryside. The shire covered an area of 2,007.9 square kilometres (775.3 sq mi), and existed as a local government entity from 1914 until 2008, when it was amalgamated with the City of Maryborough, City of Hervey Bay and the 1st and 2nd divisions of the Shire of Tiaro to form the Fraser Coast Region.

Woocoo was proclaimed a shire under the Local Authorities Act 1902 on 4 December 1914, with its centre of administration at Brooweena. It had previously been part of the Shire of Tiaro, and also included parts of the Shires of Antigua and Howard. The shire was named for Mount Woocoo, which itself was probably named for the local Aboriginal word for "echidna". It held its first meeting on 30 January 1915. 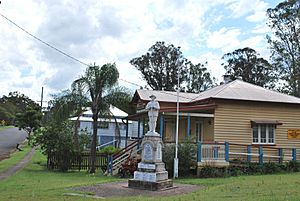 On 27 March 1976, the Shire of Woocoo grew by 1,269.00 square kilometres (489.96 sq mi) when the Shire of Burrum was renamed Shire of Hervey Bay and recast as a local government area centred on the Hervey Bay urban area. The Local Government (Maryborough and Woocoo) Regulation 1993, which took effect on 31 March 1994, resulted in Maryborough's annexation of about 700 square kilometres (270 sq mi) of Woocoo's area. At this time, Woocoo was resubdivided into three divisions each electing two councillors.

On 15 March 2008, under the Local Government (Reform Implementation) Act 2007 passed by the Parliament of Queensland on 10 August 2007, Woocoo merged with the City of Hervey Bay, City of Maryborough and part of Tiaro to form the Fraser Coast Region.

The Shire of Woocoo included the following settlements:

All content from Kiddle encyclopedia articles (including the article images and facts) can be freely used under Attribution-ShareAlike license, unless stated otherwise. Cite this article:
Shire of Woocoo Facts for Kids. Kiddle Encyclopedia.