Brooweena War Memorial is a heritage-listed memorial at Smith Crescent, Brooweena, Fraser Coast Region, Queensland, Australia. It was built in 1922 by F W Webb. It was added to the Queensland Heritage Register on 21 October 1992.

The Brooweena War Memorial was erected by the residents of the Woocoo Shire in late 1922. It is not known who designed the monument but it was produced by Maryborough monumental masonry firm F W Webb. The marble and sandstone memorial honours the 39 local men who served during the First World War including the 10 fallen. A later set of plates records the 43 local men and women who served in the Second World War.

The strength of Brooweena's patriotic support during the First World War was remarkable. It funded an ambulance for France and has another memorial (a privately funded bridge) south of the town. The size of the digger memorial is large in comparison to the size of the town.

Australia, and Queensland in particular, had few civic monuments before the First World War. The memorials erected in its wake became our first national monuments, recording the devastating impact of the war on a young nation. Australia lost 60 000 from a population of about 4 million, representing one in five of those who served. No previous or subsequent war has made such an impact on the nation.

The origin of this digger memorial is unclear. The pedestal is of a style not found elsewhere in Queensland and the inscription is also considered to be unusual.

The monument originally stood in front of St Mary's Church of England about three miles from Brooweena on the Maryborough-Biggenden Road in Teebar (now within Boompa). It was unveiled there on Saturday 6 January 1923 by Major-General Thomas William Glasgow. Prompted by fears of vandalism, it was moved to its present location in late 1992. 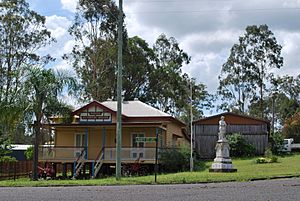 War memorial in the grounds of the Woocoo Historical Museum, 2008

The First World War Memorial is situated in the grounds of The Woocoo Historical Museum.

It comprises an unusually designed pedestal surmounted by a digger statue.

The sandstone memorial sits on a concrete base step. Above this are three smooth-faced sandstone steps, two of which are the same width, separated by a thinner step. On the front face of the two larger steps are leaded marble plaques bearing the names of the men and women who served in the Second World War. The uppermost step is capped with a cyma recta moulding from which the square pedestal projects. Marble plates are located on the side and front faces of the pedestal and bear an inscription in the form of a verse, the names of the 10 local men who fell and the 39 others who served in the First World War. Semi-circular hood-moulds are located over the top of each plaque. A series of moulded steps sit above this, on which the digger statue stands.

The digger statue stands with his head erect and his hands resting on top of a rifle which is in the reversed position and rests on the top of the right boot. A tree stump support is located behind and to the right side of the statue.

Brooweena War Memorial was listed on the Queensland Heritage Register on 21 October 1992 having satisfied the following criteria.

This particular statue is of aesthetic value, both for its prominence as a landmark in the town and for its unusual pedestal design and inscription.

Erected in 1922, the memorial at Brooweena demonstrates the principal characteristics of a commemorative structure erected as an enduring record of a major historical event. This is achieved through the use of appropriate materials and design elements. As a digger statue it is representative of the most popular form of memorial in Queensland.

This particular statue is of aesthetic value, both for its prominence as a landmark in the town and for its unusual pedestal design and inscription.

All content from Kiddle encyclopedia articles (including the article images and facts) can be freely used under Attribution-ShareAlike license, unless stated otherwise. Cite this article:
Brooweena War Memorial Facts for Kids. Kiddle Encyclopedia.