Bargara is a coastal town and suburb in the Bundaberg Region, Queensland, Australia. In the 2016 census the suburb of Bargara had a population of 7,485 people.

The town of Bargara lies 384 kilometres (239 mi) north of the state capital Brisbane and just 13 kilometres (8 mi) east of Bundaberg. Bargara is considered to be a satellite suburb of Bundaberg, with only sugar cane fields separating the two centres. 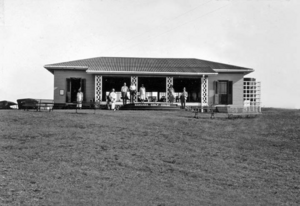 Prior to 1913, Bargara was officially known as Sandhills. The Sandhills Provisional School opened in 1893, and was renamed Bargara State School in 1921. The name Bargara is derived from the names of two adjacent localities, Barolin and Woongarra.

Bargara Post Office opened by 1923 (a receiving office had been open since 1912).

On Australia Day 2013, Bargara was struck by a tornado spawned by ex-Tropical Cyclone Oswald. The tornado damaged over 150 properties, and injured up to 17 people, 2 seriously.

The town is serviced by the main roads of Bargara Road, Bauer Street, See Street, The Esplanade, Miller Street and Woongarra Scenic Drive.

All content from Kiddle encyclopedia articles (including the article images and facts) can be freely used under Attribution-ShareAlike license, unless stated otherwise. Cite this article:
Bargara, Queensland Facts for Kids. Kiddle Encyclopedia.