Kids Encyclopedia Facts
Not to be confused with Bundaberg Rum. 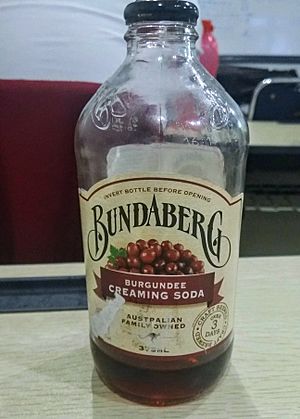 Bundaberg Brewed Drinks Pty Ltd is an Australian family-owned business that brews non-alcoholic beverages. The company was established in Bundaberg in 1960 as a bottling and fermenting business. In 1968, Mr. and Mrs. Fleming (senior) along with Cliff and Lee Fleming, bought the business, then known as Electra Breweries. From then on, it was run by mother, father, son and daughter. Over the years, the company has seen growth in sales and brand recognition, both domestically and internationally. They export to over 44 countries across the globe and they are most known for their ginger beer and other carbonated beverages. In March 2018, the company entered into a partnership with PepsiCo to distribute their beverages across the United States, although the two remain separate companies.

There are 13 flavours in the range as well as 3 diet varieties. The flavours include:

There is also a Limited Release brew, Spiced Ginger Beer, that is only available at key times of the year.

Royal Crown Draft Premium Cola is produced under licence and is not available for purchase within Australia, except at the brewery tourist facility known as "The Barrel". 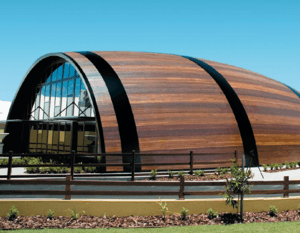 In 2005, Bundaberg Brewed Drinks opened their tourist facility, the Bundaberg Barrel, one of Australia's Big Things in Bundaberg. The Barrel has a 3D hologram video, interactive displays on the brewing process and taste testing.

All content from Kiddle encyclopedia articles (including the article images and facts) can be freely used under Attribution-ShareAlike license, unless stated otherwise. Cite this article:
Bundaberg Brewed Drinks Facts for Kids. Kiddle Encyclopedia.