Babinda is a rural town and locality in the Cairns Region, Queensland, Australia. In the 2016 census the locality of Babinda had a population of 1,253 people.

Babinda takes its name from the local Indigenous Australian language for mountain. Other sources, however, claim it is a Yidinji word for water, possibly referring to the high rainfall of the area.

Babinda Post Office opened by 1915 (a Babinda Creek receiving office had been open since 1891). 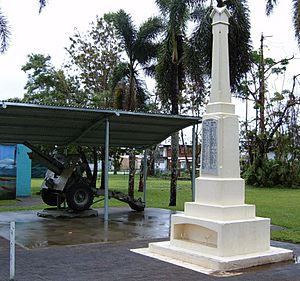 The Babinda War Memorial was unveiled by the chairman of the Cairns Shire Council Seymour Warner on 25 April 1927.

In March 2006, Babinda was struck by Cyclone Larry, damaging up to 80% of buildings.

Babinda has a number of heritage-listed sites, including:

The local newspaper is the Innisfail Advocate. There are many different community events in Babinda. The annual Harvest Festival is celebrated in June and features some unusual events including the Sugar Bowl competition, the Gumboot Toss and the Umbrella Toss (reflecting Babinda's connection to the sugar industry and its wet weather). The festival has been running since the 1960s but did not occur in 2006 due to Cyclone Larry. 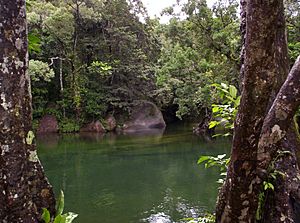 Babinda Creek, as seen from The Boulders picnic area

The Boulders and Devil's Pool are popular tourist attractions. A picnic area is located nearby, beside Babinda Creek.

Babinda is situated on the Bruce Highway. The town has a railway station for access to the long-distance train services, currently only the Spirit of Queensland for which an advance booking must be made for the train to stop in Babinda.

Babinda has a tropical rainforest climate (Af) with humid and persistently wet weather. It is well known and recognised as the wettest town in Australia, with an annual average rainfall of 4279.4 mm. Monthly totals over 1000 mm are not uncommon, and sometimes, usually between January and April, whole months will go by without a single sunny day.

The wet season lasts from December to May, while the 'dry season' occurs from June to November. During the wet season, heavy monsoonal downpours occur almost daily and occasionally even heavier rain from tropical lows or cyclones occurs. Rainfall still totals well over 100mm a month during the dry season; however, is usually in the form of coastal showers, which can range from 1 or 2 millimeters, to brief 100mm+ downpours. Thunderstorms with dangerous lightning and damaging winds can be a threat from October to December; however, this threat decreases when the monsoon begins to take over in January.

Babinda Kindergarten is on Church Street and Babinda Early Learning is on Pollard Road.

All content from Kiddle encyclopedia articles (including the article images and facts) can be freely used under Attribution-ShareAlike license, unless stated otherwise. Cite this article:
Babinda Facts for Kids. Kiddle Encyclopedia.