Gordonvale is a small sugar-growing town and locality situated on the southern side of Cairns in the Cairns Region, Queensland, Australia. In the 2011 census, Gordonvale had a population of 6,214 people.

Gordonvale is on the Mulgrave River.

Once a separate town, the urban sprawl of Cairns has resulted in Gordonvale being subsumed into the suburban extremities of Cairns. Gordonvale lies approximately 23 kilometres (14 mi) south of the Cairns central business district and is just east of the Gillies Range which leads to the Atherton Tableland. Gordonvale was located within the Shire of Mulgrave until its amalgamation with the City of Cairns in 1995. The City was subsequently merged into the larger Cairns Region in 2008.

A prominent natural landmark is Walshs Pyramid, which rises steeply to 922m. 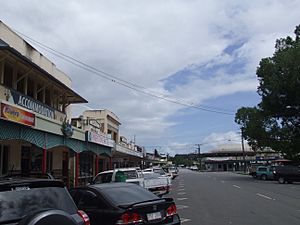 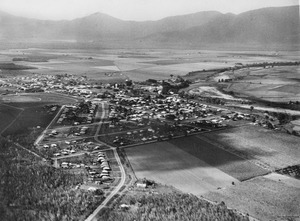 Gordonvale was previously called Mulgrave and then Nelson. The name Gordonvale was settled on as a tribute to John Gordon, a pioneer in the district who was a butcher, dairyman and grazier and early director of Mulgrave Central sugarmill.

The area was first settled in 1877 by the Alley and Blackwell families who cut a road through to Trinity Inlet so they could haul out cedar logs. By 1880, the road was well-used by miners and packers and they established the Riverstone Hotel to service the passing trade. After a while, a small town developed, encompassing three pubs, a store and a butcher shop run by John Gordon.

In the Cairns area, a Chinese businessman, Andrew Lee On built the first sugar mill in 1882, named Pioneer Mill, and established the Hop Wah Plantation on 612 acres (2.48 km2) of land. Other plantations and sugar mills were also established in the area in years following, and the region developed into a sugar cultivation and milling area.

In the late 19th century, the Bryce brothers built the town's general store which expanded greatly over the years, supplying the community and farmers with provisions as well as equipment. Also in the late 19th century "Snowy" Thomas and his family built a butcher shop with adjoining bakery that also became the lifeblood of the town and ran a delivery service using horses. Similarly, the Harris brothers ran a mechanical repair store for farming equipment and personal vehicles, another essential service for the small farming community.

Around 1902, Anthony Abdullah (Simon) moved to Gordonvale with his wife, Mary. The Abdullahs were among the earliest Lebanese families to migrate to Australia, hailing from the tiny village of Kfarsghab. Anthony owned the grounds where today stand St Michael's Catholic Church. The convent was his original family home. He ran a drapery business, and was known locally and with fondness as 'Abdullah the Turk'. The family were great benefactors of the Church. They moved to Sydney in 1923, leaving Gordonvale forever.

Around 1914 the first cinema in the town was established by Vince and Daisy Medlik with the latter's sister Nellie Sutcliffe. Vince Medlik was a carpenter and was the owner-builder. Running silent movies at first, the cinema was called "Vince Medlik's Silent Pictures". As well as movies, once a month they presented a vaudeville night produced by Nellie and the dancers from her dancing school. Displaying a rare technical skill in its time, especially for a woman, Nellie also operated the projection and took care of inaugurating the "talkies" when they later came in. Due to unforeseen circumstances the business had to be moved just before the Great Depression to the newly built and nearby Nelson Hall. It subsequently had to be closed down during the Depression even though by that stage other family members had become involved in its operation such a Vince's son Laurie Medlik. Before the Second World War the cinema reopened with new proprietors and employed Nellie Sutcliffe and Laurie Medlik, the latter managing it.

During the Second World War a contingent of approximately 3000 American paratroopers was stationed in Gordonvale and did their training there for their missions in New Guinea. The American Army commandeered some of the town's hotels to use as hospitals as many troops were injured during this training. Quite a number of local women were employed to do parachute packing.

In the 1990s a number of mosaics were commissioned by the "Friends of Gordonvale" commemorating through imagery the original businesses and shops in the town. These mosaics were cemented permanently within the footpaths directly outside the original sites of the businesses. The granddaughter of picture theatre owner Vince Medlik, award-winning artist Jewel Isaacs, designed the image for that business.

Gordonvale has a number of heritage-listed sites, including: 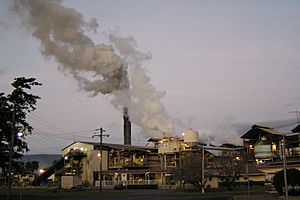 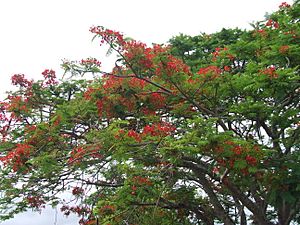 Operating since 1896, the Mulgrave Central sugar mill is located near the town centre in Gordon St. The mill services about 300 sugarcane farms in the local region and operates during the 'crush' season (about six months of the year). When operating, the mill emanates a strong sugary smell downwind. Tours of the mill were previously available, but with the increase in global sugar prices, tours have been stopped as the focus is now on sugar production.

The Mulgrave Settlers Museum is across Gordon St from the mill. The museum has a number of historical items donated from the local community and displays that represent the early gold miners, cedar cutters, Chinese workers and packers (mule train suppliers to the Atherton Tableland). The museum is open Monday to Saturday from 10AM to 2PM, however is closed from December to February.

The Great Pyramid Race and Country Fair - In a local Gordonvale pub, with two cane farmers were having an ‘argument’ after the end of a hard days work! They decided to settle this ‘argument’, with a race to the peak of the nearby Walsh’s Pyramid. This was (and still is) no ordinary race. A wager was made between the two cane farmers to see who could run up in the quickest possible time. This race created so much interest that the local bookie took bets on which cane farmer was ‘right’. From this humorous start, to a full day event with the "Great Pyramid Mountain Race" now having 175 runners. Since the race began, the training for the competition has gone from "no training at all and chasing wild pigs in the scrub", to "intense training programmes for dedicated athletes". The first official race took place in 1959 to coincide with Queensland’s Centenary Celebrations and now is an annual event hold on the second weekend of August, where some of the finest and strongest from around the world gather and strive to conquer the Mountain. Now recognized on the National Race Endurance Calendar and part of the Australian Mountain Running Association Calendar and with Trans Tasman links and other international attention, it has made this Mountain Challenge a "Great Race".

Gordonvale Golf Club is located centrally in the town and has an 18-hole golf course. The course is unusual as nine holes are shared with a horse-racing track, Gordonvale Racecourse (which predated the golf course by many years), with the other nine going through bushland to run up against the Bruce Highway.

The suburb is surrounded predominantly by sugarcane fields and is only a short drive from many interesting places including the Bellenden Ker National Park and Goldsborough Valley State Forest.

The Australian Bureau of Sugar Experiment Stations imported 101 cane toads into Gordonvale from Hawaii in June 1935. By March 1937 some 62,000 toadlets had been bred and distributed into sugar cane fields up and down the Queensland coast. Unfortunately the toads were unsuccessful at controlling the cane beetles and began their invasion which continues today.

The spread of cane toads was slow at first but by 1959 they had colonised most of Queensland’s east coast. In 1964 they appeared in the Gulf of Carpentaria and by 1984 had reached the Queensland/Northern Territory border. In March 2001 the invasion front entered the wetlands of heritage-listed Kakadu National Park and by 2009 the toads were within reach of the Northern Territory/Western Australian border. They have also spread south into northern New South Wales, with one isolated community in Port Macquarie and are now found in Sydney at Tarren Point in the south of the city.

All content from Kiddle encyclopedia articles (including the article images and facts) can be freely used under Attribution-ShareAlike license, unless stated otherwise. Cite this article:
Gordonvale, Queensland Facts for Kids. Kiddle Encyclopedia.