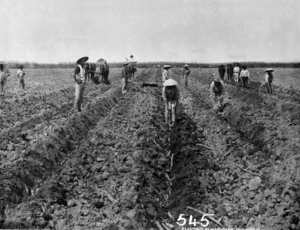 Andrew Leon (circa 1841-1920) was a Chinese-born Australian businessman in northern Queensland, predominantly in the Cairns district. He established the Hap Wah plantation that pioneered the Cairns district sugarcane industry. He was the acknowledged leader of the Cairns Chinese community from the 1870s well into the 1890s.

All content from Kiddle encyclopedia articles (including the article images and facts) can be freely used under Attribution-ShareAlike license, unless stated otherwise. Cite this article:
Andrew Leon Facts for Kids. Kiddle Encyclopedia.