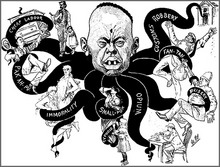 Cartoon from 1886, showing all the bad things that would happen if Chinese/Asian people were allowed into Australia

The White Australia Policy was the name given to laws that stopped non-Europeans from coming to live in Australia. These laws were put in place in 1901, and were repealed from the 1950s to 1970s.

In 1901, 98% of people living in Australia were of European background, with "white" skin, and with British laws and customs. The government wanted to keep Australia this way. This had an influence on the type of people living in Australia. In 2001, many Australians claimed to have fathers from Europe. About six percent were Asian, and about two percent were Aboriginals. Most of the remaining 92% were European.

In the 1850s many Chinese people, mainly men, came to Australia to search for gold. This lead to anti-Chinese riots on the goldfields at Lambing Flat in New South Wales, and at the Buckland River diggings in Victoria. The Victorian government tried to stop more Chinese from arriving, by charging a special tax of £10 for every Chinese person who came on a ship to Victoria. In 1861 New South Wales passed laws to stop Chinese people coming, and Queensland passed laws in 1877, and Western Australia in 1886. Later men from the Pacific Islands, called "kanakas", were brought to Australia to work on the sugarcane farms in Queensland. This also caused problems because they worked for much lower wages than other people. The new Federal government of Australia acted in 1901 to stop certain types of people coming to work or live in Australia.

The Immigration Restriction Act (1901) listed who could come to Australia and who would not be allowed into the country. The following types of people were not allowed:

This test was made to keep out anyone that the Australian government did not want to allow into Australia without being seen to be racist. Anyone who wanted to come to Australia had to be literate, that is be able to read and write. This would be proved with a dictation test. A person had to be able to write down something read to them in a European language by a government official. It did not have to be in a language that they understood. At first the test was to be given in English, but the government thought that American negroes and Japanese people would be able to pass the test. For example, to keep out people from Malta, they were given the test in Dutch. One person who spoke several languages was given the test in Gaelic. The test could also be given to people in the first year that they were living in Australia. In 1932, this was changed to the first five years, and it could be given many times. From 1902 to 1909, the test was given to 1359 people, and only 52 passed. After 1909, no person passed the test. Anyone who failed the test was forced to leave Australia. This law was used until 1958.

After World War II the Australian government wanted to bring in lots of new people. The Ben Chifley Labor Government started the Snowy Mountains Scheme which needed lots of new workers. Australians worried less about taking people from different cultures. Through the 1950s, lots of Southern and Eastern European refugees resettled in Australia, leaving a Europe still recovering from World War II or the Communist Eastern-Block behind. Liberal Prime Minister Robert Menzies' Government brought in the Colombo Plan which brought Asian students to Australian universities to help Asian development. In 1958, Menzies ended the "dictation test" and the Government said well qualified non-Europeans would be suitable. Other laws made it easier to bring non-Europeans to Australia. Prime Minister Harold Holt's "Migration Act, 1966" basically ended the White Australian Policy so that migrants from different parts of the world could all come to Australia, like refugees from the Vietnam War. Finally in 1973, the Gough Whitlam Labor Government made a law that Australian immigration officers should "totally disregard race" when considering migrants. But Whitlam took in less migrants in total, so the number of migrants not from Europe did not really start to get bigger and bigger until the Malcolm Fraser Liberal Government (1975-1983) started to take more immigrants. These days, Australia takes big numbers of migrants from everywhere.

What happened to those who never left the country?

Non-white families who chose not to depart from Australia were not affected by the Immigration Restriction Act. However many people who did not have white skin, or European culture, chose to move back to their home country due to racism that they experienced in Australia.

All content from Kiddle encyclopedia articles (including the article images and facts) can be freely used under Attribution-ShareAlike license, unless stated otherwise. Cite this article:
White Australia policy Facts for Kids. Kiddle Encyclopedia.