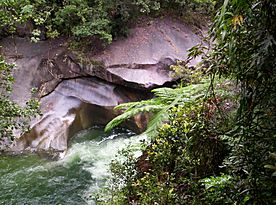 Devil's Pool as seen from its lookout

Devil's Pool or Babinda Boulders is a natural pool at the confluence of three streams among a group of boulders near Babinda, Queensland, Australia.

In 2005, the Australia TV program Message Stick gave an account of the Pool through interviews and testimonies of witnesses to investigate the prevalence of deaths to young male travellers over the years. The pools have taken 17 lives since 1959. The local council urges visitors to stay within a designated swimming area to be safe.

A sign warns of the dangers of swimming there because the water is deep and fast flowing through channels and over underwater rocks but deaths still occur – some by swimming, others by falling in unexpectedly, many being wedged in a rock "chute". On 30 November 2008, Tasmanian naval seaman James Bennett became the 17th person to drown at the site since 1959.

All content from Kiddle encyclopedia articles (including the article images and facts) can be freely used under Attribution-ShareAlike license, unless stated otherwise. Cite this article:
Devil's Pool Facts for Kids. Kiddle Encyclopedia.