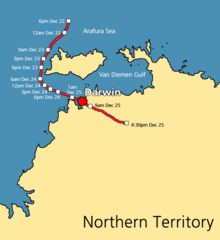 The path of Cyclone Tracy

Cyclone Tracy was a tropical cyclone that destroyed the city of Darwin, Northern Territory, Australia, from Christmas Eve to Christmas Day, 1974. It is the most compact tropical cyclone on record in Australia, with the gale force winds reaching out only 48 km (30 mi) from the centre. It is the second most compact cyclone in the world. Tropical Storm Marco of the 2008 Atlantic hurricane season had gale-force winds reaching only 19 km (12 mi) from the centre. After forming over the Arafura Sea, the Tracy moved south and hit the city with Category 4 winds on the Australian cyclone scale. It is possible that it had reached Category 3 on the Saffir-Simpson Hurricane Scale when it made landfall.

Tracy killed 71 people, caused $837 million in damage (1974 AUD) and destroyed more than 70% of Darwin's buildings, including 80% of the houses. Of the 49,000 people who lived in Darwin, 20,000 people were left homeless. More than 30,000 people had to leave the city. Most of Darwin's population were moved to Adelaide, Whyalla, Alice Springs and Sydney. Many people never returned to Darwin. The city was rebuilt using modern materials and updated building methods. Bruce Stannard of The Age stated that Cyclone Tracy was a "disaster ... without parallel in Australia's history."

All content from Kiddle encyclopedia articles (including the article images and facts) can be freely used under Attribution-ShareAlike license, unless stated otherwise. Cite this article:
Cyclone Tracy Facts for Kids. Kiddle Encyclopedia.