Kids Encyclopedia Facts
This page is about the town in Queensland, Australia. For the suburb of Canberra, see Theodore, Australian Capital Territory.

Theodore is a town and a locality in the Shire of Banana, Queensland, Australia. It was established as part of Queensland Premier Ted Theodore's ambitious Dawson River Irrigation Scheme. At the 2011 census, Theodore had a population of 452.

Theodore is situated on the Dawson River just off the Leichhardt Highway 565 kilometres (351 mi) north-west of the state capital, Brisbane. Castle Creek flows through the town and into the Dawson River immediately south of the town centre.

The Aboriginal inhabitants of the area were the Wulli Wulli people.

The first European settler in the district was Joseph Thompson who amassed a number of pastoral leases from 1850 to his death in 1857, including Oxtrack Creek, Okangal, Coteeda, Delusion Creek, Macoom, Hope, Thalba and Woolthorpe. He entered a partnership James Reid who acquired the Boam run and acquired Thompson's runs after his death and then acquired further runs, before beginning to sell out to new settlers.

In 1864 a town called Woolthorpe was surveyed and town lots offered for sale, but few were sold and no town developed at that time.

In 1893, William Woolrych acquired 13,000 acres (53 km2) of land alongside the Dawson River and gradually built it up through further land acquisitions into the very large Woolthorpe Station.

In 1905, the Queensland Minister for Lands Joshua Thomas Bell and fellow Member of the Queensland Legislative Assembly Robert Herbertson conducted a tour of the district. Herbertson reported that Woolthorpe was "a splendid property, consisting of downs and black soil flats" used for sheep grazing. Herbertson also reported favourably on an experiment to raise lucerne by irrigating 70–80 acres (28–32 ha) of cleared land beside the Dawson River. His opinion was that there was plenty of water available in the Dawson River for irrigation and the land could grow almost any crop. Herbertson believed that, with irrigation, the district would be capable of supporting a large population, provided there was cheap, easy and quick transport to the coast. This comment about transport followed Minister Bell's earlier criticism of the condition of the roads west of Gladstone which were the responsibility of the Banana Shire and the Taroom Shire.

The idea of a major irrigation scheme involving the Dawson River continued to be considered by the Queensland Parliament over a number of years. However, it was not until February 1920, that the Premier of Queensland Ted Theodore announced his support for a Dawson River irrigation scheme. Later that year, in September 1920, Ted Theodore announced that a dam would be built at The Gorge on the Dawson River (25°26′47″S 150°08′57″E﻿ / ﻿25.44645°S 150.14909°E﻿ / -25.44645; 150.14909﻿ (Nathan Gorge)) enabling 100,000 acres (40,000 ha) of fertile land to be created through irrigation along 65 kilometres (40 mi) of the Dawson River. The irrigated area would be organised into five zones: Isla, Castle Creek (later Theodore), Huon, Moura and Coolibah, with each zone having a central township. There would be irrigated farms closer to the river and dry (non-irrigated) blocks further away. It was estimated that there would be about 5000 farms and that, together with those living in the towns providing services to the farmers, the irrigation scheme would support about 50,000 people. Each town would be a "model garden city" as the local population would be sufficient to enable all modern amenities and recreational facilities; this was seen as important to attract younger people, who were believed to be abandoning rural towns in favour of cities to which many had been exposed during the Great War.

In 1922 it was announced that the gorge and the dam would both be named after Matthew Nathan, the (then) Governor of Queensland. The dam would be the second largest in the world, submerging over 83,200 acres (337 km2) and capable of storing 2,485,000 acre feet (3.065 cubic kilometres) of water. (For comparison, the present day Wivenhoe Dam has an area of 109.4 square kilometres and a capacity of 2.61 cubic kilometres).

Also in 1922, it was announced that, in addition to the dam, the Dawson Valley Irrigation scheme would include the construction of a railway line to service the Dawson Valley. The funding for the overall scheme was to be through a loan from America for approximately £2.5 million.

Creating the town of Theodore

As it would take some time to build the Nathan Dam, it was decided to commence on a smaller scale by initiating the Castle Creek irrigation zone by building a small low-cost weir nearby on the Dawson River, from which water would be pumped along canals to the irrigated farms. A power station was also built beside the river. The land offered for initial settlement was 264 irrigated farms of average size 13 acres (5.3 ha) and 109 dry blocks of average size 211 acres (85 ha).

The town was initially called Castle Creek after the local railway station, which in turn took its name from the creek which flowed into the Dawson River just south of the town. However, in November 1926, it was renamed in honour of Ted Theodore, who as Premier of Queensland had given so much support to the irrigation scheme. 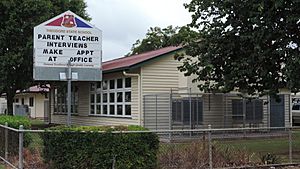 The Castle Creek receiving office opened on 1 December 1924, but was upgraded to a post office on 15 December 1924. It was renamed Theodore Post Office on 1 July 1927.

The Hotel Theodore was originally built as a boarding house to accommodate new residents to the district. 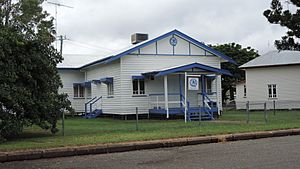 The Theodore branch of the Country Women's Association was established in about 1928. In 1932, they opened their original rest rooms in Theodore in 1923 at a cost of £113. On 21 February 1953, their current hall on The Boulevard was opened. The land was donated and the building cost £3,000. It is painted in the traditional blue-and-white colours of the CWA.

However, Ted Theodore never obtained funding for the Nathan Dam and in 1925 he resigned as Queensland Premier in order to move into federal parliament. In 1933, the Nathan Dam was postponed for 25 years. Without the water needed for irrigation, many of the small farm blocks around Theodore became economically unviable and many sold at a loss. This enabled others to enlarge their holdings to a size where it became possible to support a family with dry farming. However, with fewer families, the population estimates used for Theodore's planning could not be achieved in practice, making many aspects of the town's existing and planned infrastructure economically unviable to the disappointment of the settlers attracted by the government's promotional material of a model garden city.

In 2006, the Queensland Government announced that the Nathan Dam was the preferred short-to-medium-term water supply solution for the district to meet the needs of the growing mining activity in the Surat Basin but indicated that only existing agricultural users would be supplied, suggesting there is no plan to revive the Dawson River Irrigation Scheme more generally. The dam was originally intended to be operational by 2014. In 2009, environmental impact studies discovered that half of the already endangered Boggomoss snail (Adclarkia dawsonensis) population would be within the inundation area of the dam. A mitigation strategy would be to relocate those snail communities to other suitable habitats outside the inundation area. A trial relocation project was established but required three years to complete as the success criteria require that relocated snail communities successful breed and rear young for two generations. This trial would delay the project by at least two years. Later in 2009, SunWater claimed other studies of the snails discovered 18,000 snails in other unidentified locations, reducing the concern about the population in the inundation area and allowing the dam project to resume. However, as at August 2015, the Queensland Government still lists the snail as "endangered in Queensland" with only two population groups. Although the Environmental Impact Statement for the dam was completed in 2012, changes to the proposed route of the pipeline in 2013 meant the environmental impact statement had to be revised. As at November 2015, the revised EIS had not been released for public comment.

In March 2010 the Dawson River flooded, causing significant economic damage to the town. On 28 December 2010, a second flood forced evacuation of the town, with the level of the Dawson River exceeding 14.6 metres. 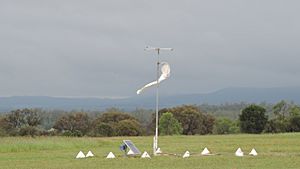 Theodore has an airport, Theodore Airport (IATA: TDR, ICAO: YTDR) but no regular scheduled services operate from it. The community has raised funds to install solar-powered lighting so the runway can be used for medical emergency flights at night. 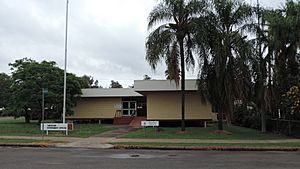 The Shire of Banana operates a library on The Boulevard in Theodore. 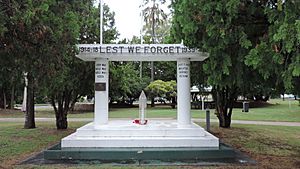 The Theodore Annual Show is held each May; it is organised by the Theodore Show Society.

All content from Kiddle encyclopedia articles (including the article images and facts) can be freely used under Attribution-ShareAlike license, unless stated otherwise. Cite this article:
Theodore, Queensland Facts for Kids. Kiddle Encyclopedia.