Miles is a town and a locality in the Western Downs Region, Queensland, Australia. In the 2016 census, Miles had a population of 1,746 people.

Formerly known as Dogwood Crossing, the town is situated on Dogwood Creek, named by German explorer Ludwig Leichhardt in 1844. The town was renamed Miles in honour of the Queensland Colonial Secretary, William Miles. Miles Post Office opened on 3 January 1878. 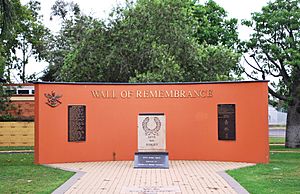 The Miles War Memorial and Wall of Remembrance was erected by the Murilla Shire Council and dedicated on 25 April 1967. 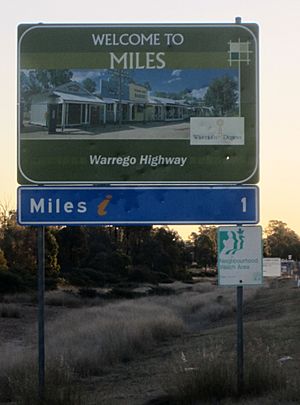 Miles is located on the Western Downs, at an elevation of 304 m. The region around Miles has hot summers with mean maximum temperatures in January of 33.4° Celsius falling to 19.6 in July. Average rainfall is 655.7 mm, falling mainly in the period between November and March

Miles is connected to Brisbane, Toowoomba and Roma by the Warrego Highway and Goondiwindi and Rockhampton by the Leichhardt Highway. Greyhound Australia operates 3 daily bus services between Brisbane and Mount Isa via Longreach and Charleville, and Coach QLD operates three buses a week between Toowoomba and Rockhampton, via Miles. The Westlander train also comes through Miles twice a week, on its way between Brisbane and Charleville, at very early hours of Wednesday & Friday mornings (westbound) and Thursdays & Saturdays (Eastbound).

All content from Kiddle encyclopedia articles (including the article images and facts) can be freely used under Attribution-ShareAlike license, unless stated otherwise. Cite this article:
Miles, Queensland Facts for Kids. Kiddle Encyclopedia.