Gayndah is a town and locality in the North Burnett Region, Queensland, Australia. In the 2011 census, Gayndah had a population of 1,789 people. 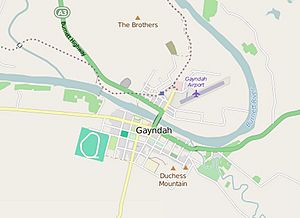 Gayndah is on the Burnett River and the Burnett Highway passes through the town. Apart from the town in the western part of the locality, the land is used for cropping and grazing. The Gayndah railway station is located on the north side of the river and is on the Mungar Junction to Monto Branch railway line.

Gayndah is 366 kilometres (227 mi) north of the state capital, Brisbane, and 145 kilometres (90 mi) west of the regional city of Maryborough.

Exploration of the Gayndah area began in 1847 by explorer Archer and Surveyor James Charles Burnett (1815-1854). The first European settlers arrived in 1848, and the town was established in the following year. A post office was established at Gayndah in 1850. This suggests that Gayndah may be the oldest officially Gazetted town in Queensland though, it should be noted that, a convict colony of 47 people existed on the Brisbane River, CBD site in 1825. This is known as the 1824 Colony.

Agriculture and grazing have been the dominant industries of the area. The town is the centre of Queensland's largest citrus-growing area. The Gayndah Orange Festival is held every two years to celebrate this industry. The town's information centre is located inside a man-made orange.

Brisbane's population by 1856 was only an estimated 3,840. Gayndah and Ipswich were regional towns of similar size and competed with Brisbane to become the capital of Queensland when it became a separate colony from NSW in 1859. The main impetus to the growth of Brisbane and the development of a distinctive city centre came through the introduction of self-government, hand-in-hand with immigration and general economic expansion.

By 1868 Brisbane was the largest town in Queensland with a population of 15,240. Gayndah was considered for the capital of Queensland, but lost to Brisbane because the river was not deep enough, making it impossible for large cargo ships to unload near the town.

The well-known "Wetheron" property, 12 miles from Gayndah, was taken up by William Humphrey in 1845, and from him it passed to the Hons. Berkeley Basil and Seymour Moreton, sons of the Earl of Ducie. When the foundations of Gayndah were being laid there were only a few squatters on the Burnett, and these were nearly all educated men of good families with command of money and the confidence of the Banks and financial institutions. It must have made considerable progress when Tom White went there in 1857 and started the newspaper, The Burnett Argus, in April 1861.

The railway was opened to Gayndah on December 16, 1907. Historian Matt J Fox spoke of Gayndah in 1923: "The Gazette now represents the Press in Gayndah, which is a very prosperous town of nearly a thousand people, the centre of a thriving district of farmers and fruit-growers and squatters, with a rural population of over 4,000 people".

The name Gayndah is of Aboriginal origin and comes either from Gu-in-dah (or Gi-un-dah), meaning 'thunder', or from Ngainta, meaning 'place of scrub'.

In 1872, the town was the location where the hoax fish Ompax spatuloides was supposedly procured. 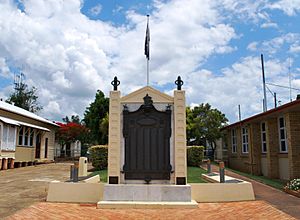 On 8 September 1919 the Gayndah War Memorial was dedicated by the Member of the Queensland Legislative Assembly for Burnett, Bernard Corser.

Another famous hoax is the story of the Gayndah Bear, a black bear said to be wandering around the banks of the Burnett river. The Gayndah Bear was first sighted in the late 1950s and again in 2000.

The Mango Tree is a 1977 Australian drama film based on the novel The Mango Tree by Ronald McKie and directed by Kevin Dobson and starring Geraldine Fitzgerald and Sir Robert Helpmann. Filming took place in the town of Gayndah, Mount Perry and Cordalba as well as Bundaberg. The shoot went for seven weeks starting April and ending in June. The streets of Gayndah were closed for filming and a street-scape was created to emulate the 19th century period of the screenplay. Gayndah was chosen because much of its early, country town architecture was intact and reflected the period effectively. Lead actor Christopher Pate is the son of actor Michael Pate who also produced the film.

Gayndah has a number of heritage-listed sites, including:

Gayndah has a public library, the Gayndah Library. The former St Joseph's Convent in Meson St Gayndah was in 2011 converted into an arts and cultural centre, The Gayndah Arts & Cultural Centre which also houses the Gaynah Art Gallery. Also located in Gayndah is the tourist attraction The Big Orange.

Gayndah has one sister city, according to the Australian Sister Cities Association.

All content from Kiddle encyclopedia articles (including the article images and facts) can be freely used under Attribution-ShareAlike license, unless stated otherwise. Cite this article:
Gayndah Facts for Kids. Kiddle Encyclopedia.