Murgon is a rural town and locality in the South Burnett Region, Queensland, Australia. In the 2016 census, the locality of Murgon had a population of 2,378 people. 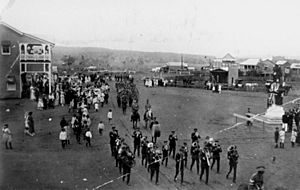 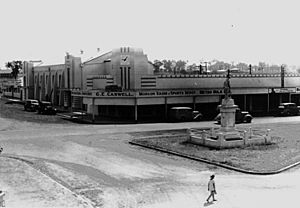 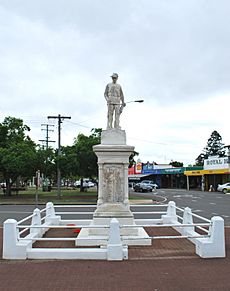 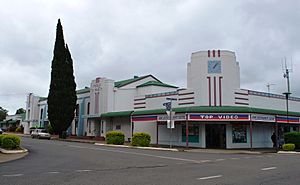 Murgon Post Office opened by June 1908 (a receiving office had been open from 1904).

The foundation stone of the Murgon War Memorial was laid on 25 April 1920 (ANZAC Day) by Lieutenant Colonel Wilder Neligan. On 11 November 1921, the digger memorial was dedicated by RSL chairman, Major General Spencer Browne.

In the early 20th century the Nanango railway line reached the town. The town was the administrative centre for the former Shire of Murgon which existed from 1914 until 2008.

Murgon has a number of heritage-listed sites, including:

Murgon is also close to a famous fossil site. The Murgon fossil site is the only such site in Australia with a diverse vertebrate fauna dating to the early Eocene epoch, around 55 million years ago, only 10 million years after the extinction of the dinosaurs.

The South Burnett Regional Council operates a library in Murgon.

Notable residents of Murgon include:

All content from Kiddle encyclopedia articles (including the article images and facts) can be freely used under Attribution-ShareAlike license, unless stated otherwise. Cite this article:
Murgon Facts for Kids. Kiddle Encyclopedia.