Goomeri ( goo-MERR-ee) is a town and locality in the Gympie Region, Queensland, Australia. In the 2016 census, Goomeri had a population of 664 people.

European settlement in the Goomeri area began in 1846 with the establishment of Booubyjan Homestead and Boonara Station. Closer settlement took place in 1911 with the sale of rural allotments and town blocks. Goomeri Post Office opened by June 1912 (a receiving office had been open from 1902). 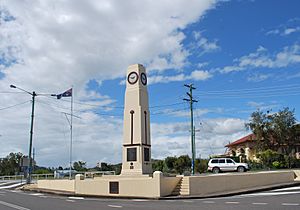 On 15 November 1940,the Goomeri Memorial Clock Tower was unveiled by the State President of the RSL, Raymond Huish.

With delightful parks and many of the buildings built in the 1920s, Goomeri is a quiet and pleasant place that boasts an agreeably relaxed old world charm. The town is also known as "Clocktown" due to the landmark town clock built in 1939. Goomeri's impressive Hall of Memory – still in use today, was built in 1926 and is now a National Trust-listed building.

The town is also well known for its gourmet food. Goomeri offers variety dining of options from fine dining, country food, gourmet cheeses and locally grown olives to award winning pies. Goomeri is the gateway to the South Burnett wine district, with numerous vineyards and cellar doors within proximity. Other industries in the area include beef and dairy.

The Goomeri Pumpkin Festival, held on the last Sunday in May each year, attracts up to 14,000 visitors each year. The highlight of the Pumpkin Festival is the "Great Australian Pumpkin Roll" down Policeman's Hill.

Goomeri’s information centre situated near the windmill at Lions Park in Moore Street. Open 10am – 4pm, Monday to Friday. Goomeri also has a hotel and art gallery.

Kinbombi Falls is a popular retreat with a large picnic area and barbecues, close to Goomeri. A walking track leads to a deep natural pool. An easy track skirts the top of the gorge, offering breathtaking views.

29 kilometres (18 mi) north of Goomeri is Springbrook Host Farm, home of the Visit Oz scheme, which provides training and work for young travelers on outback properties all over the country. 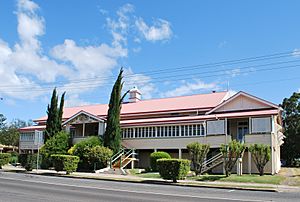 Goomeri has a number of heritage-listed sites, including:

In the 2016 Census, there were 664 people in Goomeri (State Suburbs). Of these 49.4% were male and 50.6% were female. Aboriginal and/or Torres Strait Islander people made up 8.7% of the population. The most common ancestries in Goomeri (State Suburbs) were Australian 34.6%, English 30.3%, Irish 7.1%, German 7.1% and Scottish 6.4% according to the data from Australian Bureau of Statistics.

All content from Kiddle encyclopedia articles (including the article images and facts) can be freely used under Attribution-ShareAlike license, unless stated otherwise. Cite this article:
Goomeri Facts for Kids. Kiddle Encyclopedia.