The Lockyer Creek is a creek located in South East Queensland, Australia. A tributary of the Brisbane River, the creek is a major drainage system in the Lockyer Valley. Rising on the eastern slopes of the Great Dividing Range, the creek flows generally north-easterly for more than 100 kilometres (62 mi) before it reaches its confluence with the Brisbane River north-northeast of Lowood, and downstream from the Wivenhoe Dam. The creek is named after Edmund Lockyer.

Draining parts of the western Scenic Rim, the creek's headwaters are in the Main Range National Park, a small sub-section of the Great Dividing Range. Its tributaries drain the slopes east of Toowoomba and areas to the north of Gatton. The total stream length of the Lockyer Creek network is 6,056 kilometres (3,763 mi).

Lower areas of the catchment have been cleared for intensive agriculture. Upper parts of the catchment remain mostly forested, partially protected within Lockyer National Park formerly known as White Mountain State Forest. Bushfires, soil protection, water quality and flood management are the main resource management issues for the waterway. The creek is significantly degraded. The poor conditions have resulted in unstable stream banks and gully erosion from the removal of riparian vegetation.

There are a total of nine major private and public water storages within this drainage system, including Atkinson Dam, Bill Gunn Dam and Lake Clarendon. The Lockyer Creek valley had been one of the driest catchments in Queensland during the recent droughts in Australia.

During the 2011 Queensland floods, on 10 and 11 January the creek experienced severe flash flooding from overnight and daytime heavy rain in a catchment of about 2,000 square kilometres (770 sq mi). During the floods the creek reached 18 metres (59 ft) deep, a record that was higher than what was experienced during the 1974 Brisbane flood.

The Bureau of Meteorology recorded a rise of 8 metres (26 ft) in 23 minutes during the flash flood but initially dismissed the reading as a fault. It was estimated that 4,000 tonnes or 4,000 megalitres (1,100×10^6 US gal) of water per second flowed through Lockyer Creek, leading to the use of descriptive phrases such as "wall of water", or even "inland tsunami". Water rose approximately 9 feet (2.7 m) above the 1893 flood level recorded at the Lockyer Creek Railway bridge (see below).

A report by GHD Group for the Brisbane City Council suggested that flood mitigating dams on Lockyer Creek and Bremer River could be a useful measure for flood proofing Brisbane. 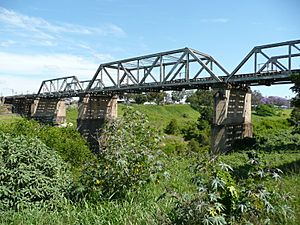 The Lockyer Creek Bridge at Bageli Park, designed by William Pagan, is one of the largest of its type in Queensland and one of Australia's first reinforced concrete arch rail bridges. The bridge, built in 1910/1911, features three spans, each supported by two arches, and appeared on a stamp that was part of a series featuring landmark bridges. A model of the bridge was featured in the April 2011 edition of the Australian Model Railway Magazine. The bridge is still used for very heavy Brisbane bound coal and grain traffic. Another single arch bridge on the same line, but over a side gully, with the same name, is closer to Gatton and was built in 1903. Further downstream in the district of Clarendon, an earlier railway structure (1885) built of timber piles with a deck of iron trusses, is possibly as spectacular. This bridge is no longer used by rail traffic.

Lockyer Creek has a number of heritage-listed sites, including:

All content from Kiddle encyclopedia articles (including the article images and facts) can be freely used under Attribution-ShareAlike license, unless stated otherwise. Cite this article:
Lockyer Creek Facts for Kids. Kiddle Encyclopedia.