Lockyer Creek Railway Bridge is a heritage-listed railway bridge on the Brisbane Valley railway line over Lockyer Creek at Clarendon, Somerset Region, Queensland, Australia. It was designed by Henry Charles Stanley and built from 1885 to 1886 by H A Brigg. It was added to the Queensland Heritage Register on 21 October 1992.

The second section of the Brisbane Valley Branch line from Lowood to Esk was let on contract to H. A. Brigg on 2 December 1884 for £57,821. The line was opened for traffic between Lowood and Esk on 9 August 1886.

Operating the Brisbane Valley Branch was expensive because the light standard of the line limited engines to B15 standard. As there were many heavy grades on the line, more powerful locomotives could produce substantial savings in the number of trains needed. Using Great Depression relief labour to reduce the cost, strengthening the line to C16 and C17 standard was completed between 1931 and 1933. In 1932 a central timber pier was added to strengthen the 100-foot (30 m) lattice girder span.

In 1968 in preparation for the operation of 60-long-ton (61 t) diesel engine locomotives in both single and multiple operation, the longitudinal members were strengthened by the addition of 6x3 inches (76 mm) channels along each side and 9x5 inches (130 mm) transoms laid over the top. The timber piers supporting the 100-foot (30 m) span were provided with concrete bases. The railway closed for traffic in March 1993. 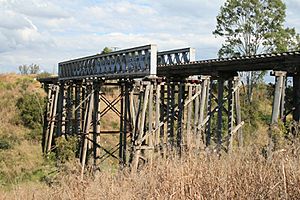 The bridge features a half-through double x 2 lattice girder bridge on a straight alignment and carrying a single track. Its spans are:

The approaches are timber girders.

Lockyer Creek Railway Bridge at Clarendon was listed on the Queensland Heritage Register on 21 October 1992 having satisfied the following criteria.

The bridge with a half-through double x 2 lattice girder spans is one of the oldest existing metal truss bridges with Miva (1886) and Wide Bay Creek (1886), and the second extant of its type constructed in Queensland with the longest span of its type in Queensland between 1884 and 1932.

This is one of the few major bridges on the Brisbane Valley Branch. Its design incorporating a 100-foot (30 m) lattice girder span supported on timber piers is similar in concept to bridges on the original Ipswich to Toowoomba line, opened in 1867, but on which all such bridges have long been removed. Although a single timber pier has been provided to strengthen the span effectively making two spans to carry heavier loads, it still shows the original mode of construction clearly.

The bridge with a half-through double x 2 lattice girder spans is one of the oldest existing metal truss bridges with Miva (1886) and Wide Bay Creek (1886), and the second extant of its type constructed in Queensland with the longest span of its type in Queensland between 1884 and 1932.

The design was associated with the Chief Engineer, Henry Charles Stanley.

All content from Kiddle encyclopedia articles (including the article images and facts) can be freely used under Attribution-ShareAlike license, unless stated otherwise. Cite this article:
Lockyer Creek Railway Bridge (Clarendon) Facts for Kids. Kiddle Encyclopedia.