Helidon is a town and locality in the Lockyer Valley Region of southeast Queensland, Australia. Helidon is located on the Warrego Highway, 106 kilometres (66 mi) west of the state capital, Brisbane, and 21 kilometres (13 mi) east of Toowoomba. The town had a population of 1,059 at the 2016 census.

Helidon is known in Queensland for its high quality sandstone (also called freestone), used extensively in private and public buildings in the state and elsewhere, including Brisbane City Hall, Brisbane Treasury Building, University of Queensland, and sought after internationally for its quality, especially in China. Helidon is also the location of a natural mineral spring whose products were sold by the Helidon Spa Water Company, now known as Kirks.

The Toowoomba Second Range Crossing will join the Warrego Highway at Helidon and is expected to open in 2018. Parts of the hilly, undeveloped north of Helidon have been protected within Lockyer National Park. 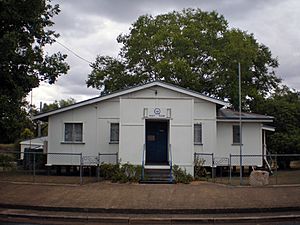 The Helidon district is called by Aboriginal inhabitants "Yabarba," the name of the Curriejung, and the nearby spring is known as "Woonar-rajimmi," the place "where the clouds fell down!"

Richard Kettle (born in Whissendine, England in 1838), together with his family, were amongst the early pioneering farming families to establish Helidon.

In 1874 settlers in the Helidon District wrote to the Board of General Education, which from 1860 was authorised to establish and administer primary schools, requesting that a school be established in Helidon. The Helidon State School opened on 11 May 1874 with 8 pupils. Helidon State School was only the second school in the Lockyer Valley district and was the 52nd primary school opened in Queensland. The school's original building was damaged in a cyclone and a new school erected at its current location in School Street in 1919.

In December 1924, a branch of the Country Women's Association was formed in nearby Gatton, and had a membership of 28 by 1925. The Helidon Branch was formed in 1933. The branch was active but in more recent times struggled with diminishing membership and in 2013 was under threat of closure. The branch closed and the closest branch to Helidon is now the Upper Lockyer/Withcott branch which meets in Withcott. 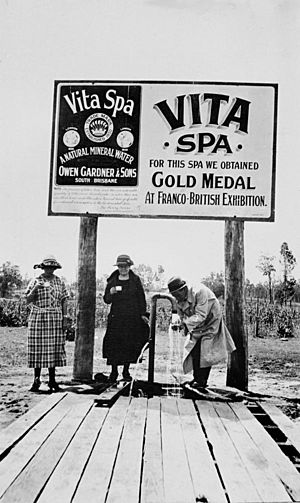 Two women and a man taking the waters at Helidon Spa, ca. 1918 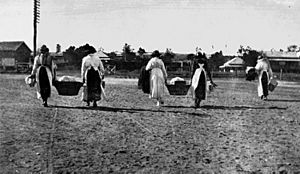 Women taking baskets of food to the troop train passing through Helidon, World War I

The Sisters of St Joseph came to Helidon in 1874 and established a convent in 1884. In April 1914 a cyclonic storm swept through Helidon destroying the Catholic Church and severly damaging the convent, as well as many of the other buildings in the town - the Mmethodist Church, the school, post office and many businesses. St. Joseph's Catholic Church was rebuilt and was opened in September 1914 by Archbishop Duhig.

The quality of the water at Helidon had long been known to the local indigenous population prior to colonisation, who believed the water had great healing and strength giving properties. They knew the spring water as "kowoor". These properties were thought to be the result of high lithium content, leading it to be sold and marketed as a powerful tonic for cleansing the bladder, kidneys and digestive system.

In the 1820s, botanist and explorer Alan Cunningham became the first European to be introduced to Helidon's mineral waters. In 1879, chemist Reginald Larard was selling water from the spring as "Oogar Dang Water." The soda water was considered by a government analyst to be "a valuable discovery" and of a quality to "satisfy anyone of its immense superiority over all common soda water". By 1881 he had entered a partnership with Scottish sportsman and entrepreneur Gilbert E. Primrose, who had purchased the agricultural land around the springs, establishing the Helidon Spa Water Company. To combat competition from imported soft drink products, the company would later merge with Owen Gardner & Sons in 1959 to become Kirks, now owned by Coca-Cola Amatil.

With the popularity of Helidon's spa water, the first 'spa park' was opened in 1926. During the 60's, a large caravan park and pool were constructed, briefly earning the area the name 'Toowoomba's Gold Coast'. The area remained popular until the 1980s amid water safety concerns, however a few spa hotels still remain today.

On 10 January 2011, Helidon was hit by a wall of flood water which had previously struck Toowoomba, part of the 2010–2011 Queensland floods. Few houses were affected directly; those that were inundated sat directly on the creek bank, lower than the rest of the town. The main creek bank did not break, and the town was used as an evacuation centre for nearby Grantham.

Helidon has a number of heritage-listed sites, including:

All content from Kiddle encyclopedia articles (including the article images and facts) can be freely used under Attribution-ShareAlike license, unless stated otherwise. Cite this article:
Helidon, Queensland Facts for Kids. Kiddle Encyclopedia.