Kilcoy is a rural town and locality in the Somerset Region, Queensland, Australia. In the 2016 census, the locality of Kilcoy had a population of 1,898 people.

The township is on the D'Aguilar Highway, 94 kilometres (58 mi) north west of the state capital, Brisbane, and just to the north of Lake Somerset. The topography directly north of the town is dominated by the mountains of the Conondale Range and covered by forests, some of which are protected in state forests and the Conondale National Park. Kilcoy is located in the Somerset Region.

Kilcoy was the heartland of the Jinibara People and the name comes from a patch of lawyer cane (jini) on Mount Kilcoy; ‘bara’ means’ people’ or ‘folk’; thus Jinibara are the ‘People of the Lawyer cane’. Kilcoy was known as Bumgur, meaning the ‘blue cod’.

The Kilcoy region is a rich Aboriginal cultural landscape. Mount Archer was known as Buruja, and also the name of a wetland near Villeneuve that was one of the main camps of the Dungidau clan. Bora rings existed at ‘Wellcourt’ on Somerset Dam and at Sandy Creek east of Kilcoy, Oaky Creek and Waraba Creek.

The junction of the Brisbane and Stanley Rivers was known as Gunundjin, meaning a ‘hollow place’, and a sacred place, called Gairnbee Rock, recalled a dreaming story of a girl who went swimming there and was turned by her father, a gundir (clever man) by magic into a rock to save her from a dangerous evil spirit. The Stanley River was also called Gairnbee, meaning the water gum. The Brisbane River was known as Mairwar or Mairrwarrh, meaning ‘platypus’ in Dungidau. 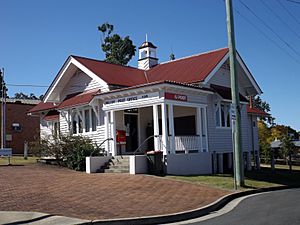 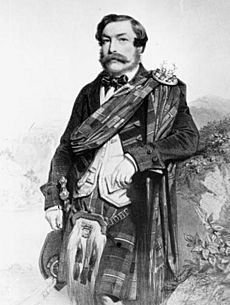 The locality was originally called Hopetown after early settler Captain Louis Hope. In 1841, brothers Evan and Colin Mackenzie, from the town of Kilcoy in Scotland, took up land west of Durundur (in the Stanley River valley) and began grazing sheep soon after land was opened to free settlement. They renamed it after their home town. They sold the property to Charles A. Atherton in 1849. Atherton in turn sold it to Captain Hope and John Ramsay in 1854. The partnership broke up ten years later, and Hope became sole owner and built the Kilcoy Station homestead of bricks, made on the property, and red cedar. He stayed on in Kilcoy until 1900. Station managers for Captain Hope were Bryant about 1860, Captain Talbot, 1864 and William Butler from 1871 until the sale, where he purchased the homestead block. Hopetoun Post Office opened on 1 December 1892 (a Kilcoy receiving office had been open from 1889) and was renamed Kilcoy in 1907.

The site of the 'Town of Kilcoy' was surveyed by W. E. Hill by April 1888, and the first land sale was on 6 November that year. On 1 December 1892, a post office was opened at Kilcoy, and named Hopetoun post office, after Louis Hope. The township was referred to unofficially as Hopetoun until in 1908 the post office name was changed to Kilcoy, and the town's real name came back into general use. Captain Hope was the uncle of the first Governor General of Australia, Lord Hopetoun, who was a visitor to Kilcoy Station.

Towards the end of the 1800s large properties and Government leases began to be divided up for closer settlement. Blocks capable of supporting a family were eagerly sought after, fenced and cleared. The main source of income for these settlers was dairying and they worked hard against the elements to ensure they were self-sufficient. By the 1890s the only original lease country left was in the Mt Kilcoy and Sandy Creek districts, part of Durundur Station. This country was not opened for settlement until 1902. Surveyed in 1888, the township quickly developed at the junction of Sheep Station and Kilcoy Creeks to service these settlers and their families. It was originally named Hopetoun but was later changed to Kilcoy to avoid incorrect mail distribution to other towns of the same name in Victoria and Western Australia.

Kilcoy’s first Provisional School was opened in 1884 at Sheep Station Creek, some five to six miles north of Kilcoy Homestead, the name changing to Sheep Station Creek Provisional School in 1892 when the Kilcoy School opened its doors in Hope Street in Kilcoy. At that time there were still no subdivisions north of William Street as that was part of Kilcoy Station which was sold up in 1907. The first Post Office was built in rented premises in Royston Street in 1892, the official Post Office in Kennedy Street still being some 21 years into the future. Hopetoun Post Office opened on 1 December 1892 (a receiving office had been open from 1889) and was renamed Kilcoy in 1907. 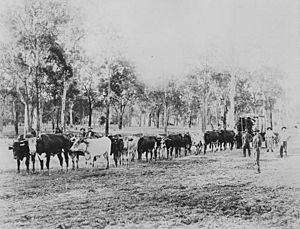 Timber milling operations were established as early as 1877, with Frank Nicholson building at Villeneuve, followed by James Green (1888), Hancock Brothers (1897), George Seeney and William and Stan Kropp in the same vicinity. The turn of the century saw a huge increase in activity as Hancock & Gore timber mill began operation. Timber cutters and mill workers were needed and Kilcoy became a very busy place. At one stage up to 100 bullock teams worked between Kilcoy and Caboolture. Within ten years there were several churches, hotels (Hopetoun – 1897; Exchange 1902/3), a bank (Union – 1907), more schools and many shops opened their doors for business. The telephone was connected to the Post Office in 1906 and to the first private residence in 1911. The period before the First World War saw a further increase in development with the building of a private hospital (1908-1945/6) and a general hospital (1912), Courthouse (1909), new Post Office (1913) and School of Arts (town hall -1911). 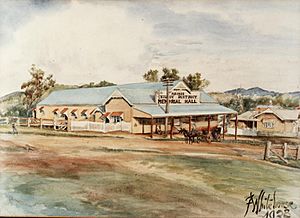 In 1912 the Shire of Kilcoy was formed, becoming independent from its former inclusion in the Caboolture Shire, the Kilcoy Show Society was formed and the first locally owned motor car arrived. 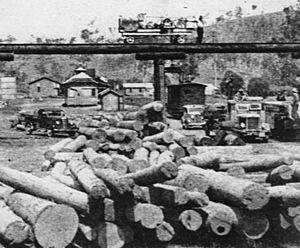 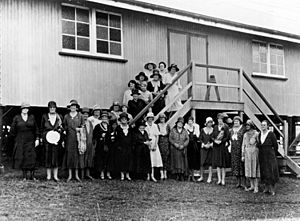 Members of the Country Women's Association in Kilcoy, 1931

Kilcoy became a thriving, prosperous town providing all the services required to maintain all needs of the district. With distance travel still not largely contemplated, nor in most cases desired or even possible, countless local and strongly-supported social, sporting and community-based clubs and organizations were established, revolving around the mounting interest in pastimes such as cricket, tennis, football, golf, rifle shooting, draughts, automobiles (1926), horse racing, eisteddfod, choral and a Masonic Lodge (1907). 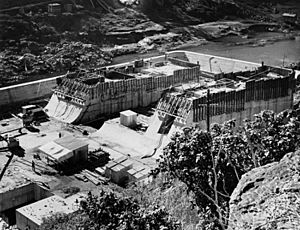 Somerset Dam was constructed between 1935 and 1959 with suspension of construction during the Second World War. The dam is situated on the Stanley River approximately 220 kilometres (140 mi) upstream from the mouth of the Brisbane River. Construction of the Somerset Dam created jobs and in 1953 Kilcoy Pastoral Company established the meat works and has steadily increased production to what it is today.

One of the most famous Aboriginal people in Queensland’s history, Gaiarbau, (known as Willie MacKenzie), was born at Kilcoy in the 1870s; Died in a Salvation Army Home in Brisbane and buried on 24 Jun 1968 in Mt Gravatt Cemetery in a Monumental Plot, Portion 4E, Section 21, Grave Number 1058; in the 1950s he recorded a series of tapes with Dr L.P. Winterbotham of the University of Queensland, that today provides one of the most detailed understandings of Aboriginal culture in southeast Queensland. This connection to country assisted the Jinibara being given Native Title determination by the Federal Court of Australia in 2012.

In the 1960s, road transport ensured the demise of the railway line (1964) and the old Kilcoy yard was converted many years later into a park known as Yowie Park. Deregulation of the dairy industry has caused a lot of these small farms to become unviable. The total population for the wider area serviced by the town at the 2011 Australian Census was 4,840.

A sand mining operation was proposed for the town in 2011, but the application was withdrawn on 31/10/2012 following strong opposition by the local residents. 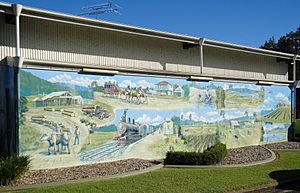 Most of Kilcoy's residents are employed servicing the surrounding pastoral area. (According to the 2006 census, Kilcoy had a population of 1,500.) The Anglican parish is also well known for its ecumenical activities and anti-war stance. The local Roman Catholic Church also has a strong ecumenical focus.

Kilcoy has a number of heritage-listed sites, including Kilcoy Homestead on Kilcoy-Murgon Road.

Most of Kilcoy's residents are employed servicing the surrounding pastoral area. The town's industry mainly revolves around beef, with 1/3 of the primary school's population made of immigrants who came for work in the Kilcoy Pastoral centre.

All content from Kiddle encyclopedia articles (including the article images and facts) can be freely used under Attribution-ShareAlike license, unless stated otherwise. Cite this article:
Kilcoy, Queensland Facts for Kids. Kiddle Encyclopedia.