Guelph ( Canada 2016 Census population 131,794) is a city in southwestern Ontario, Canada. Known as "The Royal City", Guelph is roughly 28 kilometres (17 mi) east of Waterloo and 100 kilometres (62 mi) west of Downtown Toronto, at the intersection of Highway 6 and Highway 7. It is the seat of Wellington County, but is politically independent of it.

The current Guelph began as a settlement in the 1820s, started by John Galt, originally from Scotland, the first Superintendent of the Canada Company. He who based the headquarters, and his home, in the community. The area - much of what became Wellington County - had previously been part of the Halton Block, a Crown Reserve for the Six Nations Iroquois. Galt would later be considered as the founder of Guelph.

Because of its low crime rates, clean environment and generally high standard of living, Guelph is consistently rated as one of Canada's best places to live. Guelph has been noted as having one of the lowest unemployment rates in the country throughout the Great Recession. In February 2016, it had the lowest rate in the country, at 3.9 per cent, compared to the national rate of 7.3 per cent; in large part, this is because of the great number of manufacturing facilities, including Linamar.

For many years, the ranked at the bottom of Canada's crime severity list. Even after a slight increase, it had the second lowest crime rate in Canada in 2014, at 43 (per 100,000 population); by comparison the national rate was 68.7.

Before colonization, the area was considered by the surrounding indigenous communities to be a "neutral" zone. On selected dates, members from these communities would meet and trade goods by the Speed River.

Guelph was selected as the headquarters of British development firm "the Canada Company" by its first superintendent John Galt, a popular Scottish novelist who designed the town to attract settlers and the surrounding countryside.

Galt designed the town to resemble a European city centre, complete with squares, broad main streets and narrow side streets, resulting in a variety of block sizes and shapes which are still in place today. The street plan was laid out in a radial street and grid system that branches out from downtown, a technique which was also employed in other planned towns of this era, such as Buffalo, New York. 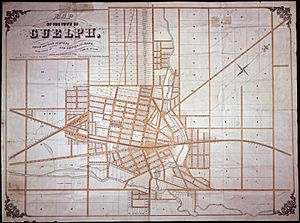 John Galt of the Canada Company established Guelph in 1827 to serve as the company's headquarters during the development of the Huron Tract, when the area was still a forest. In later years, the town came into its own as a prosperous railway and industrial centre. Guelph was founded by the symbolic felling of a tree on St. George's Day, April 23, 1827, the feast day of the patron saint of England. The town was named to honour Britain's royal family, the Hanoverians, who were descended from the Guelfs, the ancestral family of George IV, the reigning British monarch; thus the nickname The Royal City.

The directors of the Canada Company had actually wanted the city to be named Goderich, but reluctantly accepted the fait accompli. John Galt, the company's first Superintendent, constructed what was one of the first buildings in the community, his home, "The Priory" (built 1827-1828), on the banks of the Speed River near the current River Run Centre for performing arts. The building later became the first CPR station in the city.

A historical plaque commemorates his role with the Canada Company in populating Upper Canada's Huron Tract, calling it "the most important single attempt at settlement in Canadian history".

The Smith's Canadian Gazetteer of 1846 indicates that the town had a jail and court house made of cut stone, a weekly newspaper, five churches/chapels and a population of 1,240; most were from England and Scotland with a few from Ireland. In addition to many tradesmen, the community had 15 stores, seven taverns, and some industry, tanneries, breweries, distilleries and a starch factory. The Post Office was receiving mail daily.

Guelph was incorporated as a city in 1879. Despite optimism, the population growth was very slow until the Grand Trunk Railroad reached it from Toronto in 1856; in that year, the village became a town. 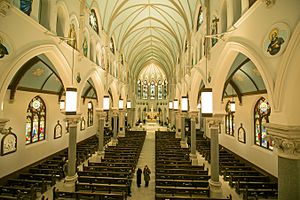 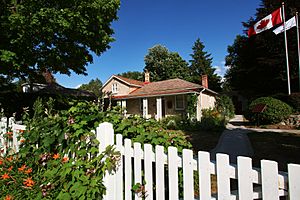 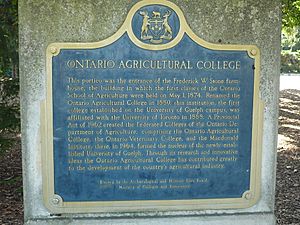 A few years later, George Sleeman Sr. founded an electric radial railway, the Guelph Railway Company, which had only five miles of track in 1895, but was extended in 1902; in addition to carrying passengers, the cars carted coal to heat the Ontario Agricultural College.

The Canadian Communist Party began as an illegal organization in a rural barn near the town of Guelph, Ontario, on May 28 and 29, 1921.

Guelph has three sites buildings on the National Historic Sites of Canada register: the Basilica of Our Lady Immaculate, McCrae House and Old City Hall.

The name Guelph comes from the Italian Guelfo and the Bavarian-Germanic Welf. It is a reference to the reigning British monarch at the time Guelph was founded, King George IV, whose family was from the House of Hanover, a younger branch of the House of Welf sometimes spelled as Guelf or Gwelf.

Downtown Guelph is situated above the confluence of the Speed River and the Eramosa River, which have numerous tributaries. The Speed River enters from the north and the Eramosa River from the east; the two rivers meet below downtown and continue southwest, where they merge with the Grand River (Ontario). There are also many creeks and smaller rivers creating large tracts of densely forested ravines, and providing ideal sites for parks and recreational trails. The city is built on several drumlins and buried waterways, the most notable being an underground creek flowing below the Albion Hotel, once the source of water used to brew beer.

This region of Ontario has cold winters and warm, humid summers, falling into the Köppen climate classification Dfb zone, with moderately high rainfall and snowfall. It is generally a couple of degrees cooler than lower elevation regions on the Great Lakes shorelines, especially so in winter, the exception being on some spring afternoons when the lack of an onshore breeze boosts temperatures well above those found lakeside.

Guelph is the fifth fastest growing city in Canada with a population growth rate of about 2% per year. According to the Ontario Places to Grow plan, Guelph's population is projected to be about 144,500 by the year 2021. Population varies throughout the year because of variations in the University of Guelph student population.

The city is mostly Christian: 74.17%, almost evenly split among Protestants and Roman Catholics. The largest non-Christian religion is Buddhism: 1.45%, followed by Islam. 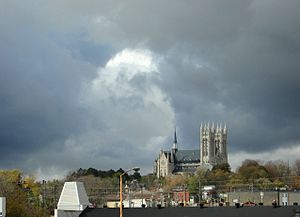 Basilica of Our Lady Immaculate, above city 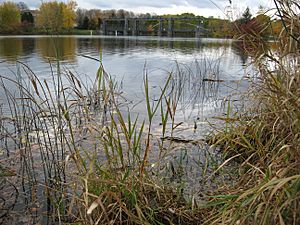 Most of the natural attractions of Guelph are located beside the two rivers which pass inside the city, Speed River and Eramosa River.

The Sleeman Centre is a sports and entertainment venue in Guelph. The large, modern facility allows for a variety of events such as concerts, sporting and family events, trade shows and conferences, and it is home to the local hockey team, the Guelph Storm.

From a Bell Organ factory to the opera singer Edward Johnson, Guelph has been a source of musical contribution. Today, Guelph has a thriving indie rock scene, which has spawned some of Canada's more well-known indie bands. Guelph is also home to the Hillside Festival, a hugely popular music festival held at nearby Guelph Lake during the summer, as well as the Guelph Jazz Festival. 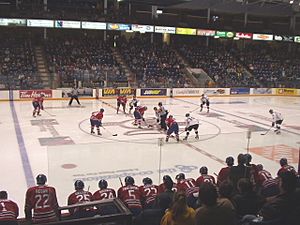 Guelph Transit provides local transportation around the city. On June 20, 2007, Guelph Transit launched a web-based system known as Next Bus. Global positioning satellites (GPS) technology and advanced computer modelling provide riders via the Internet, handheld devices (including Palms, Blackberries, and Web-capable cellular phones), or their telephones to receive accurate, real-time arrival and departure information. Intercity connections by GO Transit and Greyhound Canada are made at the Guelph Central Station. 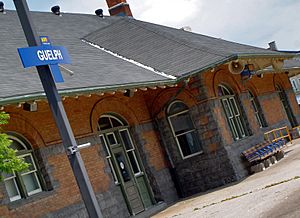 Guelph was the first municipality in Canada to have its own federally chartered railway, the Guelph Junction Railway. This 25 kilometre (16 mile) link to the CPR is still municipally owned.

The following is cited from the 2010 community profile:

"Guelph is also served by both the Canadian National Railway and the Canadian Pacific Railway. The City's own Guelph Junction Railway provides industry with freight handling facilities and connections to CNR and CPR. Via Rail provides inter‐city passenger rail service. On December 19, 2011, GO Transit began commuter train service to Guelph, with two trains heading eastbound to Toronto in the morning, and two returning westbound in the evenings."

All content from Kiddle encyclopedia articles (including the article images and facts) can be freely used under Attribution-ShareAlike license, unless stated otherwise. Cite this article:
Guelph Facts for Kids. Kiddle Encyclopedia.