The Art Gallery of Guelph (AGG), formerly the Macdonald Stewart Art Centre, is a public gallery and adjoining sculpture park in Guelph, on the corner of Gordon Street and College Avenue. The AGG has a permanent collection of over 9000 works which is a focus of research, publishing, educational programs, and touring exhibitions.

The AGG is a non-profit charitable organization with three sponsors: the University of Guelph, the City of Guelph, and the Upper Grand District School Board. As the principal public art gallery serving Guelph and the surrounding region, the Art Gallery of Guelph was founded as a new cultural institution to benefit the broad community. MSAC was established in 1978 through a provincial act as a non-profit charitable organization. When the gallery formally opened as a public art gallery on November 7, 1980, the University of Guelph curator, Judith Nasby, was appointed director and curator of the MSAC. Architect Raymond Moriyama renovated the historic 1904 school building to create a public art gallery meeting international standards. In 1983, the Donald Forster Sculpture Park was established on the 2.5-acre site adjacent to the building. It is the largest outdoor collection at an institution in Canada and has since grown to include 39 works, with an overall objective of 50, representing artists from across Canada. In 2016, the Art Gallery of Guelph appointed new leadership: Shauna McCabe became the gallery's director on August 1, 2016.

The AGG is housed in a 31,000-square-foot building comprising seven gallery spaces on two floors. There are three open-concept galleries on the main floor, including a central clerestory gallery. The second floor boasts three uniquely configured gallery spaces, as well as a lecture room, large-scale art storage, and an art studio.

The AGG undertakes contemporary exhibition programming featuring international and national artists as well as the curation of exhibitions highlighting the work of emerging to established regional artists. The Art Gallery of Guelph collection includes a large assortment of Canadian art, an expansive Inuit art collection and many other unique pieces. In 1926, the Ontario Agricultural College (affiliated with the University of Guelph since 1964) purchased a painting by Tom Thomson called The Drive (c. 1916), which marked the start of the collection and is now one of the gallery's most celebrated works. Today the permanent collection of over 9000 works features First Nations, Inuit, Canadian and international art. 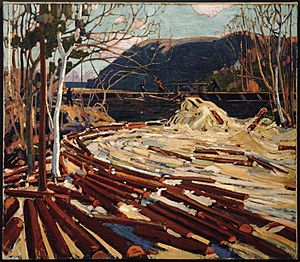 Tom Thomson, The Drive, c. 1916. This painting was purchased in 1926 by the Ontario Agricultural College with funds raised by students, faculty and staff. Today it is the art gallery's most famous piece.

Macdonald Consolidated School was built in 1904; the school's vision was to amalgamate small rural schools into one larger school with qualified teachers, an initiative known as the "Macdonald Movement". Funding was provided by Sir William Macdonald however, during construction, the trustees made design changes without informing him and upon seeing the building on opening day, Macdonald was so enraged that he refused to leave his carriage, boarded a train instead and never returned to Guelph. The school closed in 1972 and reopened as The Macdonald Stewart Art Centre.

On November 30, 1978, the Macdonald Stewart Art Centre was incorporated as a Non-Profit Organization and registered as a Charitable Organization.

The creation of the Macdonald Stewart Art Centre took place when the centre was established through a private member's bill introduced to the provincial legislature. There were four sponsors of the centre: the Wellington County Board of Education, the City of Guelph, the County of Wellington and the University of Guelph. In 2012, the County exited the partnership and subsequently the Art Gallery of Guelph Act, through which the gallery's name change was achieved, received Royal Assent on December 11, 2014.

Architect Raymond Moriyama was selected to transform the out-of-date school into a gallery which would meet international standards. Moriyama's design added two wings. The additions contain mechanical spaces and stairs, providing an additional 6,000 square feet for a total area of nearly 31,000 square feet. The façade, with its Greek-revival porches, has been restored and the original roof-line maintained.

A three-storey skylighted gallery is suitable for showing large paintings, sculptures, oversized tapestries, and banners of all types. Other exhibitions will hand in the five regular galleries which look into the well; approximately 7,000 square feet has been allotted for art exhibitions and events. In addition to gallery spaces, the first and second levels house a gallery shop with art rental service, a large lecture hall, and a multi-purpose studio/meeting room. The lower level provides a fully equipped facility for the proper care and storage of art as well as exhibition preparation. The third floor contains offices, a meeting room and a resource centre.

The gallery shop offers jewelry, porcelain, pottery, blown glass, wood, and metalwork by regional artists. Paintings and works on paper are for sale and rent. The shop is a fundraiser run by the AGG Volunteer Association.

All content from Kiddle encyclopedia articles (including the article images and facts) can be freely used under Attribution-ShareAlike license, unless stated otherwise. Cite this article:
Art Gallery of Guelph Facts for Kids. Kiddle Encyclopedia.