Canadian Tomb of the Unknown Soldier facts for kids

The Canadian Tomb of the Unknown Soldier (French: Tombe du Soldat Inconnu) is a tomb situated before the National War Memorial in Confederation Square, Ottawa, Ontario. The tomb is dedicated to Canadian service members, and holds the remains of an unidentified Canadian soldier who died in France during the First World War; selected from a Commonwealth War Grave near Vimy, in the vicinity where the Battle of Vimy Ridge took place.

At the request of the Royal Canadian Legion, the Canadian government became part of the project of creating a tomb of the unknown soldier for Canada, as part of the Canada Millennium Partnership Program. The Cabinet asked the Commonwealth War Graves Commission to select one of the 1,603 graves of unknown Canadians buried in the vicinity of Vimy Ridge. Chosen was Grave 7, in Row E of Plot 8 of the Cabaret-Rouge British Cemetery in Souchez, France, near the memorial at Vimy Ridge, the site of the first major battle where all four Canadian divisions fought together as a combined force. The remains of the soldier buried there were exhumed on the morning of May 16, 2000, and the coffin was flown in a Canadian Forces aircraft to Ottawa on May 25, accompanied by a 45-person guard of honour, a chaplain, Royal Canadian Legion veterans, and two representatives of Canadian youth. In Ottawa, the unknown soldier lay in state for three days in the Hall of Honour in the Centre Block on Parliament Hill.

On the afternoon of May 28, the body of the unknown soldier was transported to the National War Memorial on a horse-drawn Royal Canadian Mounted Police (RCMP) gun carriage. Governor General Adrienne Clarkson, her husband, and Prime Minister Jean Chrétien, as well as veterans, Canadian Forces personnel, and members of the RCMP were in the funeral cortege. Then, with full military honours before a crowd of 20,000, the body, in a silver maple casket, was re-interred in a sarcophagus in front of the war memorial. Legionnaires placed a handful of soil from each of Canada's provinces and territories, as well as from the soldier's former grave site, on the casket before the tomb was sealed.

Memorial Hall at the Canadian War Museum, with the original headstone for the unknown soldier in the left foreground 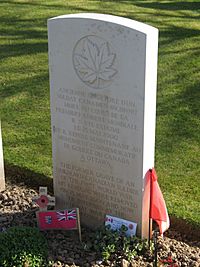 Grave marker placed at the former grave of the unknown soldier

The original headstone of the unknown soldier is the sole artifact and the focal point of Memorial Hall exhibit within the Canadian War Museum. The hall was designed in such a way that sunlight will only frame the headstone once each year on the 11th of November at 11:00 am. At the former burial site of the unknown soldier, a grave marker similar to the other headstones in the Cabaret-Rouge Cemetery was placed at the now-empty grave. It is inscribed with these words:

THE FORMER GRAVE OF AN
UNKNOWN CANADIAN SOLDIER
OF THE FIRST WORLD WAR.
HIS REMAINS WERE REMOVED
ON 25 MAY 2000 AND NOW
LIE INTERRED AT THE
NATIONAL WAR MEMORIAL
IN OTTAWA CANADA. 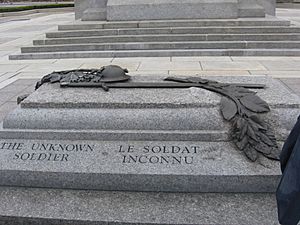 The tomb is adorned with a bronze helmet, sword, and the branches of laurels and maple leaves

The tomb is intended to honour the approximately 116,000 Canadians who died in combat, as well as all members of the Canadian Armed Forces—in all branches—who died or may die in all conflicts, past, present, and future. It is 3.5 metres (12 ft) long, 2.5 metres (8 ft) wide, and 1 metre (3 ft) high and built of Caledonia granite, originally quarried in Rivière-à-Pierre, Quebec, with a bronze relief sculpture and four bronze corner pieces. The granite was selected for its colour—matching that of the war memorial. The bronze work—showing a medieval sword, a First World War helmet, and branches of maple and laurel leaves (symbolising both victory and death)—was designed by Canadian artist Mary-Ann Liu and cast in Roberts Creek, British Columbia. Three of the corner pieces show the different variants of the Memorial Cross during the reigns of three Canadian monarchs since the cross' inception—George V, George VI, and Elizabeth II—while the fourth is a poppy.

The design, chosen by committee from six submissions by Canadian artists, reflects some of the themes and style of the Vimy Memorial, designed by Walter Seymour Allward. The site is maintained by Public Works and Government Services Canada.

The tomb has become a focal point at all commemorative events at the National War Memorial. At the first Remembrance Day following the tomb's installation, what became a tradition started spontaneously as attendees placed their poppies on the tomb. This act expanded to include the leaving of cut flowers, photographs, or letters to the deceased. The spontaneous display of respect has also carried over to Canada Day, when the public leaves small, paper national flags on the tomb.

The tomb covered with remembrance poppies during Remembrance Day

The tomb covered with paper flags of Canada during Canada Day

The Royal Canadian Legion commissioned in 2001 a small work of art on the theme of the Tomb of the Unknown Soldier by André Gauthier.

Since 2007, a pair of sentries from the Ceremonial Guard, in full dress uniform and with unloaded weapons, have been stationed at the tomb, on rotation from 9 am to 5 pm. Originally, the programme ran only through July and August. This was expanded in 2014 to run from April 9 (the date of the start of the Battle of Vimy Ridge) to November 10, as well as during significant military anniversaries throughout the rest of the year.

Each morning, the first sentries are marched out with a duty piper and, upon taking their posts, are read their orders by the posting non-commissioned member: both are ordered arms and to stand at ease, weapon thrust out to the full extent of the right arm, head up, and feet 30 inches apart. Sentries hold their post for one hour before being replaced, though, a sentry may stand for two shifts in a day. Sentries on duty may march their beat, which consists of the senior sentry giving a sharp tap on the ground with his or her rifle butt, then acknowledged by the other sentry with a tap of his or her own rifle. A two-three pause between each movement, both sentries then come to attention, take a pace forward, shoulder their rifles, turn outwards, and start marching their beat of nine paces. At the ninth pace, both execute an about-turn and return to their original position, if a halt is signalled. Marching the beat can continue for the full hour, if desired. Sentries may not interact with the public. 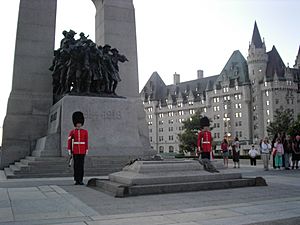 Sentries from the Ceremonial Guard stand next to the tomb. The National War Memorial is situated behind the sentries.

As the Ceremonial Guard is drawn from all branches of the Canadian Forces (the units chosen via an established rotation), the sentries, too, can be members of the Canadian Army, Royal Canadian Navy, or Royal Canadian Air Force, as well as the Special Operations Command. The commanding officer of each unit decides who will be sent to Ottawa. Occasionally, members of a police force will act as sentries at the tomb, such as when officers from the Royal Canadian Mounted Police did so on July 5, 2013, to honour Sergeant Arthur Richardson, a member of the North-West Mounted Police, who earned the Victoria Cross serving with Lord Strathcona's Horse during the Second Boer War.

All content from Kiddle encyclopedia articles (including the article images and facts) can be freely used under Attribution-ShareAlike license, unless stated otherwise. Cite this article:
Canadian Tomb of the Unknown Soldier Facts for Kids. Kiddle Encyclopedia.