Great Keppel Island (also known as Ganumi Bara) lies 15 kilometres (9.3 mi) from the coast off Yeppoon along the Capricorn Coast of Central Queensland, Australia. The island is the largest of the eighteen islands in the Keppel Group, and covers an area of more than 14.5 km². It is within the local government area of Shire of Livingstone (between 2008 and 2013, it was within the Rockhampton Region).

The tropical climate and numerous beaches attract tourists from all points, and a number of accommodation houses cater for them including Keppel Lodge and various houses. There are 17 white sandy beaches with some of the highest cover of hard coral reefs on the Great Barrier Reef. The coral diversity of these reefs matches that of the Whitsundays with clear waters most of the year around. The island is served by ferries and aircraft.

The islands were named by Captain James Cook in April 1770 after the then First Lord of the Admiralty, Admiral Augustus Keppel.

Prior to European settlement, the island was home to the Woppaburra and Ganumi people of the Darumbal nation, with centuries old middens testifying to the quantity of seafood found in the surrounding waters. European settlers killed or removed most of the indigenous population by the end of the 19th century.The first recorded visit to the island was conducted by R. Ross, R. Spence, Dr. Callaghan, together with a lieutenant Compigne directing a contingent of the Native Police.Despite the standard policy of shooting 'wild blacks' on sights, they did come across one group, and save a woman who injured herself while fleeing. It emerged later at some point, either at this time or earlier, the natives had fled white violence: Woppaburra people later pointed out hundred yard line of bones, the skeletal remnants of massacre of their people executed by a boarding party that mowed them down, including an elderly aboriginal carrying his crippled child on their back. During its early European history, the island was used to raise sheep, however it is now a tourist destination. In August 1866, the first pastoral lease on the South Keppel island was granted to Robert Ross obtained a lease over South Keppel Island, with J. H. Young taking up a lease on North Keppel Island. Ross was partnered in his endeavor by C E Beddome and Sir Arthur Palmer

Great Keppel Island has a number of heritage-listed sites, including: 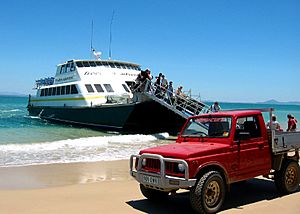 The first resort on the island was operating in 1967. There are no high-rise resorts on the island. The resort is now closed however there is still accommodation on Great Keppel Island which ranges from tents and cabins or even a private beach house on the water's edge. Ferries depart most days to Great Keppel Island from Pier One, Rosslyn Bay. A number of charters, and full day cruises, sailing adventures, and extended tour options are also available from Keppel Bay Marina.

Great Keppel Island once boasted a resort owned by Contiki, dedicated to making it a "backpackers' island", though has recently been taken over by Mercure Resort, making it more of a family resort.

After purchasing the lease for the resort and that of Lot 21 which covers about 80% of the island, GKI Resort Pty Ltd, a subsidiary of the privately owned Australian company Tower Holdings, closed the facility in 2008. They then unveiled a $1.15 billion revitalisation plan for the island. The plan, which has been declared a "significant project" by the Queensland Government, includes a 300-room resort hotel, 300 resort apartments, 1,700 villas, a 560-berth marina and ferry terminal, a championship golf course, yacht club, sporting ovals, childcare facilities, chapel and cultural centre. The plan includes 1,300 acres (545 hectares) of environmental parkland on Lot 21 which is currently public land for recreation purposes. This land has already been recommended for a conservation park by the Department of Environment and Resource Management.

Tower chairman Terry Agnew did not have the support of the residents of Central Queensland or the Environment Department. The proposal was rejected by the Federal Environment Minister Peter Garrett in October 2009 on the grounds that there would be 'unacceptable' impacts to the World Heritage Great Barrier Reef values of the island. Unfazed by the objections and in spite of several other Great Barrier Reef Island resorts closing Tower Holdings submitted a third proposal early in 2010. The federal Tourism Minister, Martin Ferguson, announced his support for Agnew's proposal on 22 February 2012.

Whilst Contiki owned the resort it was widely visited by high-school students during the school holidays. The most popular souvenir, mainly purchased by girls, is a T-shirt proclaiming "I got wrecked on Keppel Island".

All content from Kiddle encyclopedia articles (including the article images and facts) can be freely used under Attribution-ShareAlike license, unless stated otherwise. Cite this article:
Great Keppel Island Facts for Kids. Kiddle Encyclopedia.