The Whitsunday Islands are a collection of 74 continental islands of various sizes off the central coast of Queensland, Australia, approximately 900 kilometres (560 miles) north of Brisbane. The northernmost of the islands are situated off the coast by the town of Bowen while the southernmost islands are off the coast by Proserpine. The island group is centred on Whitsunday Island, while the group's commercial centre is Hamilton Island. The traditional owners of the area are the Ngaro people and the Gia people whose Juru people has the only legally recognised native title in the region.

In 2009 as part of the Q150 celebrations, the Whitsunday Islands was announced as one of the Q150 Icons of Queensland for its role as a "Natural attraction".

The term is a misnomer as it is based on Captain Cook’s date for the naming of Whitsunday Passage, or as Cook spelled it in his HMS Endeavour journal, Whitsunday’s Passage. Based on his journal date, Cook believed that the passage was discovered on Whitsunday, the Sunday of the feast of Whitsun—Pentecost in the Christian liturgical year—which is observed 7 weeks after Easter. As the International Date Line had not yet been established, the day of discovery was actually Whit Monday. 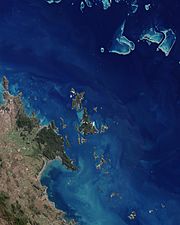 There is some contention as to exactly which islands are within the informally named Whitsunday Islands, in particular those at the southern extremity and the inclusions to the west. What is certain is that they lie within the chain named Cumberland Isles by Captain Cook (now officially the Cumberland Islands) and a reasonably defined section of that chain and surrounding waters have become known worldwide as The Whitsundays, based on a contraction of the Whitsunday Islands designation.

The Whitsunday islands are a popular tourist destination for travellers to Queensland and the Great Barrier Reef with the area being one of the most popular yachting destinations in the Southern Hemisphere. The islands received about 700,000 visitors between March 2008 and March 2009.

The Whitsunday Ngaro Sea Trail is a mix of seaways and short walks, crossing South Molle, Hook and Whitsunday islands. The tracks across the islands are linked by seaways suited to kayaking, sailing or powerboating. Camping is available at eight camping areas on the three islands. Several islands have large resorts, offering a wide variety of accommodation and activities. Chartering a yacht or bareboating is a popular way to explore the seaways, beaches and coves.

There are a total of 74 islands and islets among all the groups in the Whitsundays.

The most notable islands in the main Whitsunday group are named Dent, Hamilton, Hayman, Hook and Whitsunday which features the white sands of Whitehaven Beach.

The most notable island in the Lindeman group is its namesake Lindeman Island.

Some of the islands in the Northern group are Armit, Gloucester and Saddleback.

Listed below are islands of The Whitsundays, divided by group locality. Named rocks and islets can be found listed within the entry for the nearest island to that feature.

All content from Kiddle encyclopedia articles (including the article images and facts) can be freely used under Attribution-ShareAlike license, unless stated otherwise. Cite this article:
Whitsunday Islands Facts for Kids. Kiddle Encyclopedia.