Hamilton Island is the largest inhabited island of the Whitsunday Islands in Queensland, Australia. It is positioned approximately 887 kilometres (551 mi) north of Brisbane and 512 kilometres (318 mi) south of Cairns. It is also the only island in the Great Barrier Reef with its own commercial airport, with short direct flights from Sydney, Melbourne, Brisbane and Cairns. Like most in the Whitsunday group, Hamilton Island was formed as sea levels rose which created numerous drowned mountains that are situated close to the east coast of Queensland.

At the 2011 Australian Census, the island recorded a population of 1,208 people. Hamilton Island is a popular tourist destination all year round. In late August, the island plays host to its annual Hamilton Island Race Week yachting festival, in which more than 250 yachts from across Australia and New Zealand gather for a week of races around the Whitsunday Islands. This is only one of many events hosted on the island. Hamilton Island has won multiple awards including the Australian Traveller 'Most Desirable Island Escape' Award in 2015.

Hamilton Island was purchased in 1975 by Keith Williams and Bryan Bryt. In 1978, Keith Williams commenced construction of Hamilton Island Harbour and the resort complex shortly after. The resort opened in phases between 1982 and 1984. In 1985, a fire destroyed most of the central portion of the resort complex, which was completely rebuilt by 1986. The current Whitsunday Holiday Apartments opened in 1986 followed by the current Reefview Hotel in 1990. In 1992, the resort was placed in receivership and between 1995 and 2003 it was owned by BT Australia and managed by Holiday Inn for a portion of that time. In 1999, the five-star Beach Club opened.

Bob Oatley an Australian winemaker and his family purchased Hamilton Island in 2003. Bob Oatley first noted the potential of the island when he cruised past the island aboard a yacht when Keith Williams was in the early stages of the development of the resort. Following an investment and development program the Oatley family now offer holiday destinations there.

In 2009, there were two key infrastructure and tourism developments completed for the resort. The Hamilton Island Yacht Club was officially completed and opened by former Queensland Premier Anna Bligh during Hamilton Island Race Week. and the Hamilton Island Golf Club is new Championship resort course which opened in August 2009. The 18-hole course on neighbouring Dent Island measures 6,120 metres and is billed as the only championship island golf course in Australia.

In September 2016, it was reported by news media outlets that the Queensland Department of Environment and Heritage Protection (EHP) had issued Damage Mitigation Permits (DMP) which resulted in over 1,000 animals being culled on Hamilton Island between November 2014 and May 2016 by the Resort's operator. Over 18 months the cull resulted in the death of 599 common brushtail possums, 393 agile wallabies, 36 pied currawongs, 35 sulphur crested cockatoos, 3 torresian crows and 1 laughing kookaburra. The EHP stated the role of the permits were to allow the "ongoing management of some wildlife species to prevent unacceptable levels of damage, and to protect public safety at the airport and in the resort itself". The Resort management stated that "any culling of animals and birds is done as a last resort when all other methods have been exhausted". The RSPCA were unaware of any culling on the Island. The Resort’s management carried out the culls “to prevent damage or loss of property and to protect the health and wellbeing of staff, guests and other visitors”. Social media users were critical of the cull. 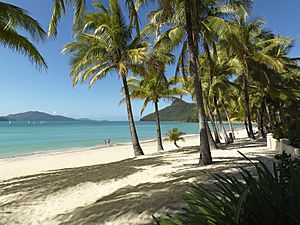 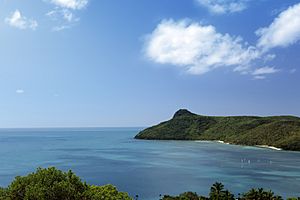 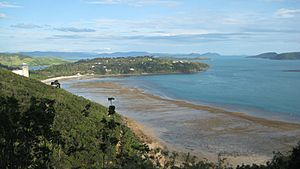 Hamilton Island Airport is the only airport in the Whitsunday Islands that is big enough to cater for larger commercial aircraft. Hamilton Island is also served by several ferries, which can only carry passengers. Mainland motor vehicles are prohibited on the island with the exception of those for tradespeople and island public transport. Private transport needs are mostly served by a fleet of golf buggies, available to tourists for rent and are included as part of some accommodation packages. A public shuttle bus operates on the island serving major points of interests and accommodation sites.

Day trips to the Great Barrier Reef Marine Park from Hamilton Island are provided by Cruise Whitsundays and Explore. Visitors can catch glimpses of migrating whales as they make their way through the warm waters of the Whitsundays from July through September each year.

Each year, Hamilton Island hosts approximately 500 wedding ceremonies, ranging from wedding groups of 2 to 200 guests. There are over 10 ceremony locations and 15 reception venues available on Hamilton Island for weddings. The island has its own non-denominational church, the All Saints Chapel, which overlooks Catseye Bay and is just one of the many ceremony venues available. In 2014, according to the National Bureau of Statistics, Hamilton Island played host to the second most marriages (including civil ceremonies) in the nation, a close second to the Yokine Recreational Centre in Perth.

At least two major films have been on location at Hamilton Island, Muriel's Wedding (1994) and Fool's Gold (2008). Hamilton island was the holiday location in the 1999 movie Sabrina, Down Under, sequel movie of Sabrina Goes to Rome, both movies extending from the popular TV series Sabrina, the Teenage Witch. Hamilton Island was the first stop for Oprah Winfrey on her Ultimate Australian Adventure in December 2010. During her stay on Hamilton Island Oprah and 93 of her fans went on an all expenses paid trip from Hamilton Island to the Great Barrier Reef and had a Barbecue reception on Whitehaven Beach hosted by celebrity chef Curtis Stone with entertainment provided by The Ten Tenors. In November 2015, international popstar Taylor Swift performed an intimate show for 100 fans in the Yacht Club on Hamilton Island as a special guest of Nova 969’s Red Room. An aerial view of Hamilton Island is the subject of a popular Windows 10 lock screen.

Drinking water is provided by a combination of rainwater harvesting and seawater desalination. A reverse osmosis seawater desalination plant was commissioned in 1996 and can supply up to 1.3 million litres of potable water per day. The plant's seawater intake is driven by two vertical turbine pumps installed on a purpose made jetty. Waste brine is discharged to a pit where it gravitates to an ocean outfall away from the seawater intake.

All content from Kiddle encyclopedia articles (including the article images and facts) can be freely used under Attribution-ShareAlike license, unless stated otherwise. Cite this article:
Hamilton Island (Queensland) Facts for Kids. Kiddle Encyclopedia.