Parkhurst is a suburb of Rockhampton in the Rockhampton Region, Queensland, Australia. In the 2016 census, Parkhurst had a population of 2,476 people.

The Parkhurst Industrial Estate is in the south-west of the suburb, while the residential land is in the west near the river and in the north-east of the suburb. Most of Parkhurst remains farmland, but Rockhampton's urban sprawl has led to further residential developments being established throughout Parkhurst including the Northridge, Rosedale, Paramount Park, Riverside and Edenbrook estates.

The Glenmore Homestead is one of the earliest in the Rockhampon area, being established in the late 1850s. Land was opened up for settlement and small farms were established. 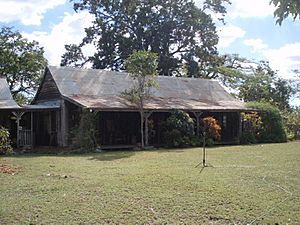 Parkhurst has a number of heritage-listed sites, including:

Parkhurst is home to the Rockhampton Heritage Village. Located at 296 Boundary Road, this open air museum showcases a range of historic buildings with exhibitions of artefacts from Rockhampton's history. The museum is a venue for local markets and has a large function venue built in the style of a traditional woolshed.

Limestone Creek Environmental Park offers a range of walking tracks in and around Limestone Creek through an open eucalypt forest where wildlife can be seen. It is popular with bird watchers and photographers. 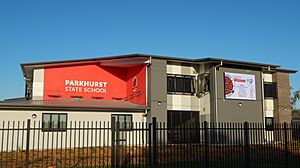 The Rockhampton-Yeppoon Road (as Yeppoon Road) runs along the south-eastern boundary.

All content from Kiddle encyclopedia articles (including the article images and facts) can be freely used under Attribution-ShareAlike license, unless stated otherwise. Cite this article:
Parkhurst, Queensland Facts for Kids. Kiddle Encyclopedia.