Farnborough is a coastal rural locality in the Livingstone Shire, Queensland, Australia. In the 2016 census Farnborough had a population of 476 people.

Farnborough is the northernmost extent of the Capricorn Coast.

The short-lived sugar industry on the Capricorn Coast commenced in Farnborough. William Broome who had property a few kilometres north of Yeppoon established the Yeppoon Sugar Company in 1883. Having attracted investors, he built a sugar crushing mill in Farnborough (23°04′45″S 150°44′12″E﻿ / ﻿23.0791°S 150.7368°E﻿ / -23.0791; 150.7368﻿ (Farnborough Sugar Mill)). Broome did not grow sugarcane himself and relied on others to grow it. As good prices were paid for sugar at that time, sugar cane plantations were developed at Farnborough and also at Cawarral and Joskeleigh. 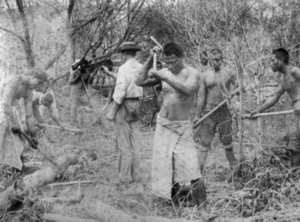 In 1889, there was a bad growing season and insufficient sugarcane was grown to make the mill profitable. The banks foreclosed, and the business was taken over by the company's Rockhampton backers. They auctioned it promptly at a significant loss to two of the mill's former shareholders. In 1891 Rutherford Armstrong became the manager and trebled production over several good seasons.

In 1902 a failure of the sugar crop led to no crushing occurring at the mill which closed in 1903.

In 1971, a Japanese syndicate headed by Yohachiro Iwasaki acquired hundreds of thousands of hectares of beachfront land including wetlands in Farnborough to build a resort. The acquisition caused widespread outrage, given that Australian citizens and developers had been refused to buy the land on several occasions prior, and also due to the belief that the deal was corrupted by kickbacks at the Queensland Government level.

Anti-Japanese sentiment ran rife including the printing of fake money featuring Mr Iwasaki's caricatured face with a currency value of 4 Grabs, a play on the term "up for grabs". When construction began, the Yeppoon RSL club posted an anti-Japanese display on their lawns. Local discontent reached its climax on 29 November 1980, the day of the Queensland Election, when a bomb was set off at Iwasaki Resort. Two men were charged but acquitted.

The project continued regardless. Originally known as the Iwasaki Resort, it later became the Capricorn International Resort. Rydges managed the resort until 2011, when the lease was taken over by Mercure.

In the 2016 census Farnborough had a population of 476 people.

All content from Kiddle encyclopedia articles (including the article images and facts) can be freely used under Attribution-ShareAlike license, unless stated otherwise. Cite this article:
Farnborough, Queensland Facts for Kids. Kiddle Encyclopedia.