Joskeleigh is a small rural community within the local government area of Shire of Livingstone, Queensland, Australia. Between 2008 and 2013, it was within the Rockhampton Region. 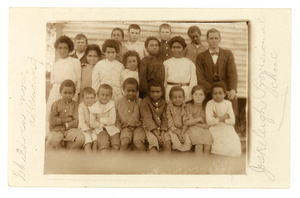 Joskeleigh Provisional School opened on 28 October 1913 in a church building, pending the erection of a school building, under head teacher Frederick Vespermann. There was an average of 21 students in 1913. In 1918 it became Josleigh State School. It closed on 29 April 1985 due to falling enrolments.

Joskeleigh has a number of heritage-listed sites, including:

All content from Kiddle encyclopedia articles (including the article images and facts) can be freely used under Attribution-ShareAlike license, unless stated otherwise. Cite this article:
Joskeleigh, Queensland Facts for Kids. Kiddle Encyclopedia.