Keppel Sands is a coastal rural town and locality in the Livingstone Shire, Queensland, Australia. In the 2016 census, Keppel Sands had a population of 360 people. 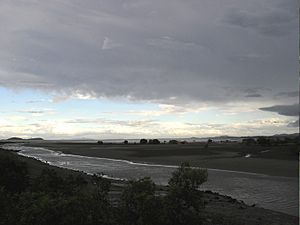 Keppel Sands is the southernmost town on the Capricorn Coast. The town is located in the Livingstone Shire Council local government area, 676 kilometres (420 mi) north west of the state capital, Brisbane.

Separated by Coorooman Creek from the larger towns of Emu Park and Yeppoon to the north, Keppel Sands is a charming village-style township centred on fishing and holiday making. Facilities in Keppel Sands include a hotel, caravan park, motel, Australia Post outlet, local store, and two boat ramps. The Coast Guard are located at Pumpkin Creek at the southern edge of the town.

Keppel Sands is home to many retirees and is a popular location for fishing and crabbing. 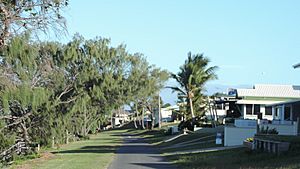 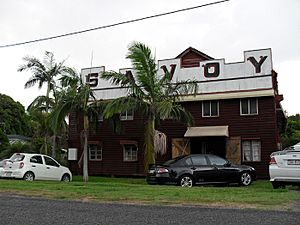 Originally known as Sandhills, Keppel Sands has long been a popular beach to visit for people from Rockhampton and the surrounding area. Over the years beach huts and weekenders gradually gave way to the more permanent housing of today. Boarding houses were popular until the road improved and daytripping to the beach became possible. The Savoy Theatre was a place for both movies and dances.

Near to Keppel Sands is Joskeleigh which was home to a large South Sea Islander community, imported as indentured labourers from various islands in Melanesia and Polynesia in a process known as blackbirding.

All content from Kiddle encyclopedia articles (including the article images and facts) can be freely used under Attribution-ShareAlike license, unless stated otherwise. Cite this article:
Keppel Sands, Queensland Facts for Kids. Kiddle Encyclopedia.