Mount Morgan Mine facts for kids

Kids Encyclopedia Facts
Not to be confused with Mount Morgans Gold Mine.

The area near the mine contains sedimentary and igneous rocks. The gold was rated 0.998 fine. 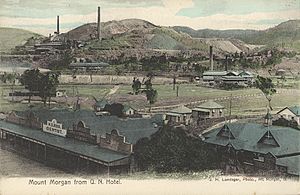 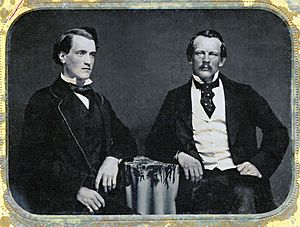 In 1882, a syndicate was created to open a gold mine at Ironstone Mountain, 39 kilometres (24 mi) south of Rockhampton, Queensland. The syndicate comprised William Knox Darcy (later influential in establishing the Anglo Persian Oil Company), Walter Russell Hall (later influential in establishing the Walter and Eliza Hall Institute of Medical Research), Thomas Skarratt Hall, and Thomas, Frederick and Edwin Morgan. Ironstone Mountain was later renamed Mount Morgan after the Morgan members of the syndicate. 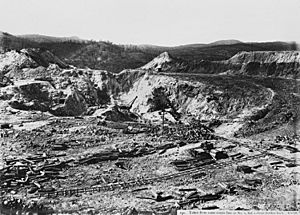 The Mount Morgan Mine was reestablished using open-cut mining methods in 1928, operating as Mount Morgan Limited.

The Queensland Government began administration of the site in 1992. Perilya/Aumin NL commenced further exploration in 1992 leading to plans for potential further reprocessing at the Mount Morgan mine site in the future. Since 2007 the mine and mining leases have been owned by Norton Gold Fields. An estimated 327,000 ounces (9,300,000 g) of gold still exist at the site.

Broader influence of the mine

The Mount Morgan mine site is currently a tourist attraction in the Central Queensland region. The site contains remaining structures of its mining operations including the General Office, Gold Rooms and Main Stack. The Arthur Timms lookout overlooks remaining mine buildings and the Mount Morgan township.

According to former Queensland Minister for Mining, Stirling Hinchliffe, water in the pit contains elevated levels of copper, aluminium, magnesium and other metals. The site contains a lime dosing water treatment plant and onsite evaporators. Controlled water releases done to prevent an uncontrolled release during heavy rainfall events has been done twice in March 2011, once in January 2013 and again in February 2013.

In June 2011, the Government of Queensland announced $24.2 million in funding for site rehabilitation and management. On 26 January 2013, the mine filled with water and overflowed in the Dee River for the first time ever.

Although mining company Carbine Resources announced plans in 2014 to extract gold, copper and pyrite from tailings and improve the mine's acid mine drainage problem, it withdrew the proposal in March 2018 due to its doubts over the financial viability of the project.

All content from Kiddle encyclopedia articles (including the article images and facts) can be freely used under Attribution-ShareAlike license, unless stated otherwise. Cite this article:
Mount Morgan Mine Facts for Kids. Kiddle Encyclopedia.