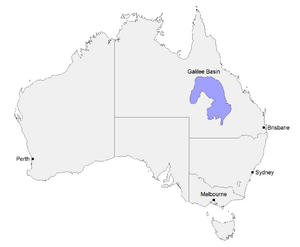 Location of the Galilee Basin

The Galilee Basin spans elements of the upper Lake Eyre drainage catchment, Bulloo river basin and Murray–Darling Basin and the adjacent eastern highlands. The basin also extends into the upper coastward Burdekin river basin and Fitzroy river basin to the north-east and east and the Gulf of Carpentaria to the north-west. This geographic complexity ensures that the Galilee Basin spans a number of physiographic regions with a relatively complex pattern in the eastern highlands and headwaters. Lake Buchanan and Lake Galilee within the Galilee Basin are classified as inland wetlands, with Lake Buchanan described as both a seasonal/intermittent saline lake and a seasonal saline marsh and Lake Galilee also as a seasonal/intermittent saline lake and as a seasonal/intermittent freshwater pond and marsh.

The climate of the Galilee Basin is generally hot and dry throughout, becoming more extreme towards the west. Monthly mean temperatures show daytime summer temperatures are mostly in the mid-30s °C with winter overnight temperatures most commonly between 5 and 12 °C. The temperature records from the past 36 years shows values ranging from −2 °C to 44 °C. ‘Hot days’, with temperatures exceeding 35 °C, can be expected up to 74 to 101 days per year. ‘Frost days’ with screen temperatures below 2 °C can be expected up to 1.4 to 10.4 days per year. Relative humidity is highest in the mornings and during February, while the lowest is in the mid to late spring mornings and afternoons. The annual rainfall within the Galilee Basin ranges between 150 mm and 1,477 mm, with an average rainfall of between 492 mm and 610 mm depending on location. Rainfall in December through March accounts for approximately 65 per cent of annual mean rainfall. The wettest month on average is January and the driest month is May.

The indigenous heritage of the Galilee Basin is complex, with at least 12 Indigenous tribal or language groups in four separate language regions—Eyre, Gulf, Northeast and Riverine. There are native title claims covering large portions of the basin and a number of Indigenous Land Use Agreements in place.

The major economic activities in the Galilee Basin are primary production (mostly rangeland grazing), government services, retail, education and tourist-related activities. The dominant occupation (32.5%) is in the agriculture, forestry and fishing category. With limited forestry restricted to the south-eastern corner and no coastal connection for fishery, this category is dominated by sheep and beef production. The second highest occupation is government services, which includes local government and health and social service care (19.8%). This is followed by five categories including retail trade; construction; education and training (schools mostly); transport, postal and warehousing; and accommodation and food services, which all provide significant employment (5 to 8%) in the Galilee Basin. Currently mining is a low-level occupation category within the subregion at 1.3% but this may increase during the constructional and/or operational phases of projected coal mining and coal seam gas extraction developments, with possible impacts on other employment categories.

The Galilee Basin has a diversity of ecological communities and species as a consequence of the interactions between its large area, several biologically significant climatic gradients, the biogeographic effects of eight river basins, and the importance of landscape form driving water and soil redistribution in semi-arid environments of inland Australia. This diversity is expressed through the presence of 31 subregions of the Interim Biogeographic Regionalisation for Australia and 46 major vegetation subgroups of the National Vegetation Information System.

The most common terrestrial vegetation NVIS subgroups are (i) Mitchell grass (Astrebla) tussock grasslands, (ii) Eucalyptus open woodlands with a grassy understorey, and (iii) cleared, non-native vegetation. Other vegetation subgroups occur with lower frequency and form a complex mosaic that gradually changes from north-east to south-west across the Galilee Basin. The woody components of these vegetation types have been subject to clearance over 16% of the Galilee Basin, mainly to the east, with the aim of improving pasture productivity. The annual rate of clearance has declined since 2005. Pasture components are reported to have stable condition, except for a recent decline in the north-east corner.

As rivers and streams are all intermittent, the durations of flow and non-flow periods, and the depth of water, together determine the number of species locally per unit area and degree of species sharing amongst rivers and residual waterholes. The ecology of rockholes (shallow depressions that collect local rainwater) and outcrop springs (springs of water that has percolated through rock layers in the immediately surrounding area) is poorly studied, as is the ecology of the species that occur within aquifers below ground level (stygobiota). However, discharge springs (springs of water that had percolated through rock layers over long distances and from which water emanates under pressure) are better studied, and numerous locally endemic species of plant, mollusc and fish have been identified. The ecology of both discharge springs and stygobiota is understood to depend on relatively stable water regimes, compared with the highly intermittent character of other aquatic habitats in the region. As a result of water drawdown for agriculture, discharge springs have been subject to significant degradation over the last century. Only 36% of the 300 springs complexes (local clusters of springs) identified in the Great Artesian Basin in 1900 are still active. There are no data on impacts of agricultural drawdown on stygobiota. Discharge springs have also been subject to invasion by exotic plants and disturbance by sheep, pigs, horses and donkeys. Riverbanks and waterholes are generally assessed to be in better condition.

The Galilee Basin straddles the Great Dividing Range and encompasses the headwaters of seven major river basins. The Thompson river and Barcoo river of the Cooper Creek system, the Diamantina River, the Flinders River in the north-west, the Bulloo River in the south, and the Warrego River in the south-east. The subregion also extends across the Great Dividing Range to the east and north-east into the headwaters of the Fitzroy river basin and Burdekin river basin. It also includes two nationally important wetlands, Lake Buchanan and Lake Galilee.

The Galilee Basin includes aquifers that are a part of the Great Artesian Basin. These large aquifers are utilised as a water supply across much the Galilee subregion and importantly form a significant part of the recharge zone. Some groundwater may also discharge to surface as springs or where hydrogeological conditions are favourable, discharge to major rivers. Water extraction and water budgets are detailed in the Great Artesian Water Resource Plan (2006), covering most of the Galilee subregion. This plan is unique in that it only applies to artesian water and connected sub-artesian water of the Great Artesian Basin, and does not include management plans for surface water.

There are numerous suggestions of the origin of the Galilee Basin. Vine (1976) proposed downwarping, however Evans (1980) have suggested pull-apart basin related to shearing. Jackson et al. (1981) has suggested the basin was created from the reactivation of basement faults and downwarping. De Caritat & Braun (1982) proposed Late Carboniferous compressional upthrust of the Anakie Inlier, creating a flexural topographic depression, followed in the Late Permian – Mid-Triassic by subduction of the oceanic plate to the east, which initiated the later development of the basin. Waschbusch et al. (2009) suggested the basin formed as a response to platform tilting caused by mantle corner flow. A review from Stewart (2011) identified an additional theory that the Galilee Basin began when crustal extension (Jericho and Denison events) during the Late Carboniferous – Early Permian reactivated older faults from underlying basins. According to I'Anson et al. (2017), total subsidence of ~2 km from the Carboniferous to the Late Cretaceous in the Galilee Basin was punctuated by two major exhumation events in the Triassic and Cretaceous.

Sedimentation was initially restricted to fluvial sandstone, but later expanded to other depocentres during deposition of fluvial and lacustrine sediments. Tuff and volcanolithic sandstone were deposited during the Early Permian (Jochmus Fm), and was followed by east-west contraction (Cattle Creek Event) that produced the Mid-Permian unconformity across the basin. Thermal subsidence (Aldebaran and Bellata events) in the Late Permian – Early Triassic generated widespread continental siliciclastics with coal and some marine sandstone across the basin. Subsequent uplift (Clematis Event) produced a wide spread Lower Triassic unconformity and was followed by fluvial quartz-rich sandstone, then lacustrine and fluvial mudstone, siltstone, and sandstone comprising the basal sequence of the Great Artesian Basin. Sedimentation ended during the Mid Triassic Hunter-Bowen Orogeny (Showgrounds and Goondiwindi events). Compression during the Late Cretaceous – Oligocene formed antiforms over faults in the basin.

Exploration for coal seam gas is in early stages, and targets the thick coal seams of the Permian Betts Creek Beds, with a secondary target being the Aramac Coal Measures. Coal seam gas was generated by thermogenic processes when maximum burial depths of ~2 km were achieved in the Late Cretaceous as well as secondary biogenic gas generation following uplift. The challenges to a viable gas project in the Galilee Basin include low gas saturations, distance to market and large volumes of produced water.

Financial analysts and Queensland Treasury officials have doubted the project is viable. UBS says world coal markets are so oversupplied that "no new coal mines needed on 5-plus-year view".

In May 2012, the Government of Queensland granted approval to Hancock Coal and GVK to construct the Alpha Coal Project. The mine is intended to export 30 million tonnes of thermal coal annually from 2015. One thousand employees will be needed once the mine is operational.

Hancock is also hoping to develop the Kevin's Corner coal mine adjacent to the Alpha project.

Mineralogy, controlled by Clive Palmer, owns thermal coal deposits in the Galilee Basin, which he claims amounts to around 100 billion tonnes of coal. However, this amount of coal resource is not substantiated by official figures. Palmer's proposed China First mine which is owned by Waratah Coal, would result in the destruction of Bimblebox Nature Refuge, which is part of Australia's National Reserve System and is listed as a conservation area of State Significance in Queensland. The reserve is co-owned local landowner Paola Cassoni who is adamant the endangered black-throated finch must be protected.

The mine is expected to export 40 million tonnes of coal a year and according to Palmer will proceed even though one of the original supporters, Vitol, has left the project. China First Coal includes an open-cut, underground longwall mine, standard gauge railway and port facility.

Galilee Basin coal quality indicates a premium-quality low sulphur and low ash thermal washed product. Further highlights of the coal quality include high ash fusion temperature, coupled with the low chlorine which reduces the slagging potential of the ash, whilst the excellent fuel ratios allows for efficient combustion and low carbon in ash. Galilee Basin coals are substantially lower in trace elements when compared to domestic and international averages. Analysis of the CO2 emissions indicates a competitive product when compared against international benchmarks, producing 1.1 tonnes of CO2 per Megawatt hour of electricity generated. This is on a par with some other high-rank Australian and South African coals.

Port facilities at Abbot Point are expected to be the export point for coal sourced from the Galilee Basin. The expansion plans have faced significant controversy over concerns about impacts from dredging and dumping of spoil on the nearby Great Barrier Reef Marine Park and the impacts of exported coal on the Great Barrier Reef. The current proposal for terminal expansion involves dumping dredge spoil within the terminal area.

A proposal for a coal-fired power station in the area has been placed on hold. Water supply for mines in the basin was once provided as a reason supporting the development of the Bradfield Scheme.

In the south-east of the basin lies the Rewan Formation. Small assemblages of the tetrapod species, Lydekkerina from the Lootsbergian age, have been found.

All content from Kiddle encyclopedia articles (including the article images and facts) can be freely used under Attribution-ShareAlike license, unless stated otherwise. Cite this article:
Galilee Basin Facts for Kids. Kiddle Encyclopedia.