Augathella is a town in western Queensland, Australia, and is part of the Shire of Murweh. Augathella lies on the Matilda Highway, is 85 kilometres (53 mi) north of the town of Charleville, and 748 kilometres (465 mi) west of Brisbane (Queensland's capital). The town lies on the banks of the Warrego River. At the 2006 census, Augathella had a population of 395.

The town came into being initially as a resting place for bullock teams lying at the convergence of three bullock tracks from Morven, Tambo, and Charleville. Originally called Burenda it was renamed Ellangowan (still the name of the local watering hole) and when gazetted in 1883 called Augathella. This is apparently an Indigenous Australian word meaning "camp on a waterhole", referring the Warrego River. A service centre sprang up to service their needs and the needs of the burgeoning grazing industry.

Augathella is the destination of cattle drovers in the Australian folk song Brisbane Ladies. This song is alternately called "Augathella Station". 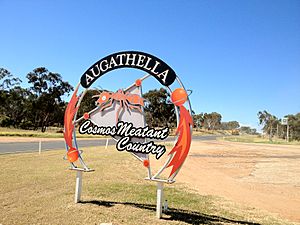 The town's service centre was bypassed by the new Matilda Highway during the 1980s. Some new businesses have slowly encroached back onto the highway frontage. There is a growing arts centre in the town, public library, public swimming pool, a bowls club and there is an annual rodeo. Augathella has some polocrosse teams.

Today, grazing is still the predominant industry of the area. The town is situated on the Warrego River (an Aboriginal word meaning river of sand).

Since 2011 the entrance the town has been marked by 4.5m steel and copper giant sculpture of a meat ant - in a reference to its former junior football team, named the "Mighty Meat Ants".

All content from Kiddle encyclopedia articles (including the article images and facts) can be freely used under Attribution-ShareAlike license, unless stated otherwise. Cite this article:
Augathella Facts for Kids. Kiddle Encyclopedia.