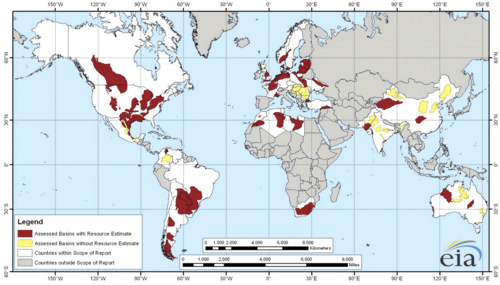 48 structural basins with shale gas and oil, in 38 countries, per the US Energy Information Administration, 2011.

Shale gas is natural gas that is found trapped within shale formations. Shale gas has become an increasingly important source of natural gas in the United States since the start of this century, and interest has spread to potential gas shales in the rest of the world. In 2000 shale gas provided only 1% of U.S. natural gas production; by 2010 it was over 20% and the U.S. government's Energy Information Administration predicts that by 2035, 46% of the United States' natural gas supply will come from shale gas.

Some analysts expect that shale gas will greatly expand worldwide energy supply. China is estimated to have the world's largest shale gas reserves.

A 2013 review by the United Kingdom Department of Energy and Climate Change noted that most studies of the subject have estimated that life-cycle greenhouse gas (GHG) emissions from shale gas are similar to those of conventional natural gas, and are much less than those from coal, usually about half the greenhouse gas emissions of coal; the noted exception was a 2011 study by Howarth and others of Cornell University, which concluded that shale GHG emissions were as high as those of coal. More recent studies have also concluded that life-cycle shale gas GHG emissions are much less than those of coal, among them, studies by Natural Resources Canada (2012), and a consortium formed by the US National Renewable Energy Laboratory with a number of universities (2012).

Some 2011 studies pointed to high rates of decline of some shale gas wells as an indication that shale gas production may ultimately be much lower than is currently projected. But shale-gas discoveries are also opening up substantial new resources of tight oil / "shale oil".

All content from Kiddle encyclopedia articles (including the article images and facts) can be freely used under Attribution-ShareAlike license, unless stated otherwise. Cite this article:
Shale gas Facts for Kids. Kiddle Encyclopedia.