Sea of Galilee facts for kids

The Sea of Galilee is Israel's largest freshwater lake, about 53 kilometers (33 miles) around, about 21 km (13 miles) long, and 13 km (8 miles) wide; it has a total area of 166 km², and a depth of about 43 meters. At 209 meters below sea level, it is the lowest freshwater lake on Earth, and the second lowest lake in the world after the Dead Sea, a saltwater lake. It is not a real sea - it is called a sea because of tradition.

The lake is also known on modern maps as Lake Galilee' or Lake Tiberias, in the region of Galilee. In modern Hebrew, it is known as ' (ים כנרת), "Sea of Kinnereth" (Numbers 34:11; Joshua 13:27). It has also been called the Lake of Gennesaret or the Sea of Gennesaret (Luke 5:1) after the name of a small fruitful plain on its western side. The Arabic name for the lake is (بحيرة طبريا) meaning Lake Tiberias. Other names are: Ginnosar, Lake of Gennesar, Sea of Chinneroth, Sea of Tiberias (Roman) and Waters of Gennesareth. 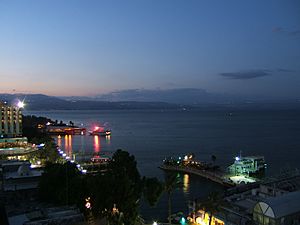 Dusk over the Sea of Gailee looking out from Tiberias, Israel.

Its main source is the Jordan River, which flows through it from north to south. The lake is deep in the Jordan Great Rift Valley, the valley caused by the separation of the African and Arabian Plates. Because of this, the area has earthquakes and, in the past, volcanic activity.

Due to its low-lying position in the rift valley, surrounded by hills, the sea can get sudden violent storms; as in the New Testament story about Jesus calming the storm. A main feature of the lake seems to be that it is always changing. It is still famous, just as in New Testament times, for having plenty of fish, and in today's restaurants, "St. Peter's Fish" (tilapia) is very popular.

The Sea of Galilee is on the ancient Via Maris road which linked Egypt with the northern empires. The Greeks, Hasmoneans, and Romans started towns and settlements here: Gadara, Hippos, Tiberias and others. The 1st century historian Flavius Josephus wrote of a large fishing industry at this time, with 230 boats regularly working in the lake. 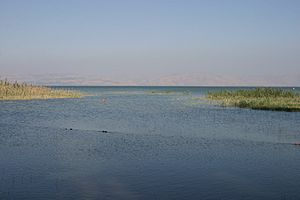 The Sea of Galilee

Much of the ministry of Jesus was on the shores of Lake Galilee. In those days, there were many settlements and villages all around the lake and plenty of trade and ferrying by boat. The gospels of Mark (1:14-20), Matthew (4:18-22), and Luke (5:1-11) tell how Jesus got four of his apostles from the shores of Lake Galilee: the fishermen Simon and his brother Andrew, and the brothers John and James. One of Jesus' famous teachings, the Sermon on the Mount, was given on a hill overlooking the lake. Many of his miracles were also recorded to have been here: his walking on water, calming a storm, feeding five thousand people and many others.

In 135, the second Jewish revolt against the Romans, called Bar Kokhba's revolt, was put down. The Romans responded by sending all Jews away from Jerusalem and not letting them come back. The center of Jewish culture and learning thus moved to the region of the Kinneret, particularly to the city of Tiberias.

In the time of the Byzantine Empire, the lake's importance in Jesus' life made it a major destination for Christian pilgrims. This led to the growth of a tourist industry, with package tours and plenty of comfortable inns.

The lake lost importance when the Byzantines lost control of it. The area came under the control of the Umayyad Caliphate and later Islamic empires. Except for Tiberias, little by little, the major towns and cities began to be left empty. In 1187, Saladin defeated the armies of the Crusades at the Battle of Hattin, mainly because he cut the Crusaders off from the valuable fresh water of the Sea of Galilee.

In 1909 Jewish pioneers built their first cooperative farming village (kibbutz), Kvutzat Kinneret which trained Jewish immigrants in farming and agriculture. Kinneret was the center of the Kibbutz culture of early Zionism.

In 1923 an agreement between the United Kingdom and France set the border between the British Mandate of Palestine and the French Mandate of Syria. The British gave the southern Golan Heights to the French in return for the northern Jordan Valley. The border was drawn again so that both sides of the Jordan river and the whole of the Sea of Galilee, including a 10-meter wide strip along the northeastern shore, were made a part of Palestine [1]. The 1947 UN Partition Plan put this area inside the Jewish state. 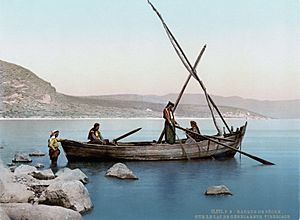 During the 1948 Arab-Israeli War, Syria occupied the lake's northeastern shore. In 1967, the State of Israel took control of the entire Sea of Galilee, as well as the Golan, during the Six Day War. Syria still claims the northeastern shore of the sea [2], arguing it is a part of the Golan Heights.

Israel's National Water Carrier, built in 1964, takes water from the lake to the population centers of Israel, and is the source of most of the country's drinking water. Israel also supplies water from the lake to the West Bank and to Jordan (under the terms of the Israel-Jordan Treaty of Peace). More demand for water and some dry winters have resulted in a lower water level that is sometimes dangerous.

Today, tourism is again very important in the area. The entire Sea of Galilee is a popular holiday resort area. The many historical and spiritual sites around the lake, especially its main town Tiberias, are visited by millions of local and foreign tourists every year. Other economic activities include fishing in the lake and agriculture, particularly bananas, in the fertile belt of land surrounding it.

A key attraction is the site where the Kinneret's water flows into the Jordan River. Thousands of pilgrims from all over the world come to be (re-)baptized there every year.

All content from Kiddle encyclopedia articles (including the article images and facts) can be freely used under Attribution-ShareAlike license, unless stated otherwise. Cite this article:
Sea of Galilee Facts for Kids. Kiddle Encyclopedia.