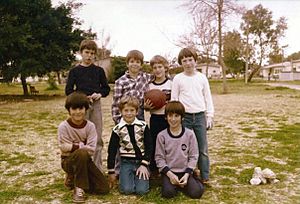 Kibbutz boys with a football

A kibbutz is a collective community in Israel that was traditionally based on agriculture. The first kibbutz, established in 1909, was Degania. Today, farming has been partly supplanted by other economic branches, including industrial plants and high-tech enterprises. Kibbutzim began as utopian communities, a combination of socialism and Zionism.

In recent decades, some kibbutzim have been privatized and changes have been made in the communal lifestyle. A member of a kibbutz is called a kibbutznik.

In 2010, there were 270 kibbutzim in Israel. Their factories and farms account for 9% of Israel's industrial output, worth US$8 billion, and 40% of its agricultural output, worth over $1.7 billion. Some kibbutzim have also developed substantial high-tech and military industries. For example, in 2010, Kibbutz Sasa, containing some 200 members, generated $850 million in annual revenue from its military-plastics industry. 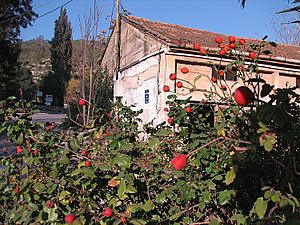 The first kibbutzim were founded in the upper Jordan Valley, the Jezreel Valley and the Sharon coastal plain. The land was available for purchase because it was marshy and malaria-infested. The Zionists believed that the Arab population would be grateful for the economic benefits that developing the land would bring. The first kibbutzniks hoped to be more than farmers. They sought to create a new type of society where all would be equal and free from exploitation.

All content from Kiddle encyclopedia articles (including the article images and facts) can be freely used under Attribution-ShareAlike license, unless stated otherwise. Cite this article:
Kibbutz Facts for Kids. Kiddle Encyclopedia.