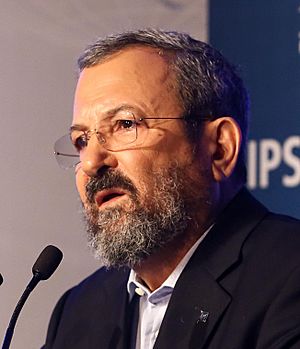 Ehud Barak, born as Ehud Brog, Hebrew: אהוד ברק , (born in February 12, 1942 in Mishmar HaSharon) is a former Israeli general and politician. He was a member of HaAvoda (Labor Party) till 2011.

He studied physics, mathematics and economics at the Hebrew University of Jerusalem and Stanford University.

All content from Kiddle encyclopedia articles (including the article images and facts) can be freely used under Attribution-ShareAlike license, unless stated otherwise. Cite this article:
Ehud Barak Facts for Kids. Kiddle Encyclopedia.