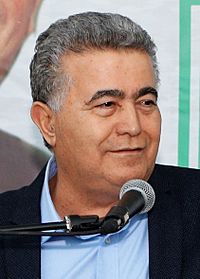 Amir Peretz (Hebrew: עָמִיר פֶּרֶץ‎‎; born on 9 March 1952 in Boujad, Morocco) is an Israeli politician and trade unionist. He is the leader of the Labor Party, and as a member of the Knesset for the party.

A Knesset member almost continuously since 1988, he has also been Minister of Defence and Minister of Environmental Protection, as well as heading the Histadrut trade union federation between 1995 and 2006.

Since 17 May 2020 he has been minister of economy in the Fifth Netanyahu Government.

All content from Kiddle encyclopedia articles (including the article images and facts) can be freely used under Attribution-ShareAlike license, unless stated otherwise. Cite this article:
Amir Peretz Facts for Kids. Kiddle Encyclopedia.