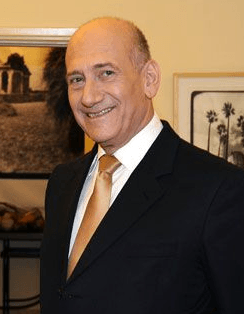 Ehud Olmert, Hebrew: אהוד אולמרט , (born 30 September 1945 in Binyamina) is a Israeli lawyer and former politician. He was Prime Minister of Israel.

In 2006 he switched from Likud to newly formed Kadima. He was the head of Kadima until September 2008.

He was the 12th Prime Minister of Israel between 14 April 2006 and 31 March 2009, succeeding Ariel Sharon and succeeded by Benjamin Netanyahu.

From February 2016 till July 2017, Olmert was spending time in prison because of a felony conviction of breach of trust and bribery.

All content from Kiddle encyclopedia articles (including the article images and facts) can be freely used under Attribution-ShareAlike license, unless stated otherwise. Cite this article:
Ehud Olmert Facts for Kids. Kiddle Encyclopedia.