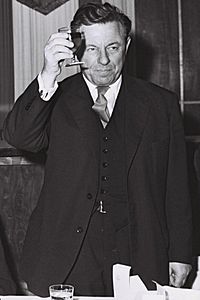 During his time as mayor, Jerusalem became a modern city, especially after its reunification in 1967. He was once called "the greatest builder of Jerusalem since Herod." Teddy Stadium is named after him.

Kollek was born in Nagyvázsony, Hungary. In 1935, shortly before Nazis took power of Austria, his family moved to Jerusalem. Kollek died on 2 January 2007 in Jerusalem at the age of 95.

All content from Kiddle encyclopedia articles (including the article images and facts) can be freely used under Attribution-ShareAlike license, unless stated otherwise. Cite this article:
Teddy Kollek Facts for Kids. Kiddle Encyclopedia.