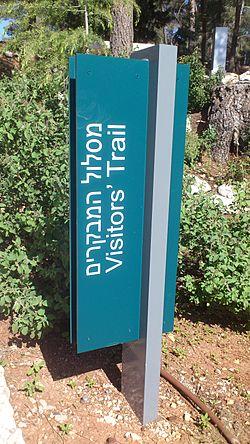 a map with newsletters mark every corner in the visitors trai

Mount Herzl (Hebrew: הר הרצל, Har Herzl), also called Har HaZikaron (Hebrew: הר הזכרון, which means "Mount of Remembrance"), is the national cemetery of Israel in Jerusalem. It is named for Theodor Herzl, the founder of modern political Zionism. Yad Vashem, the main Holocaust museum of Israel is on the Mount of Remembrance. It is an extension of Mount Herzl. Mount Herzl is 834 meters above sea level. The northern area is the National Military and Police cemetery and the southern area is the National Civil Cemetery of the State of Israel.

The southern slope of Mount Herzl is dedicated to the leaders and important public persons of the state of Israel. In Hebrew this cemetery is called Helkat Gdolei Ha'Uma ("the section of the great people of the nation"). The cemetery region includes national memorials of the Israeli public and memorial gardens of leaders that visit the state of Israel.

Mount Herzl Plaza with a view of Herzl's grave

Mount Herzl Plaza is central ceremonial plaza in Mount Herzl in Jerusalem. The plaza is used for the opening ceremony of Israel Independence Day every year. On the northern side of the plaza is the grave of Theodor Herzl, the founder of modern political Zionism. The plaza is at the highest spot of Mount Herzl in the center of the national cemetery. On 18 April 2012, during the rehearsals for the Independence Day ceremony, an electrical lamppost fell down. It killed one soldier and wounded seven other soldiers. The soldier was buried in the military cemetery nearby.

The Menorah sculpture is at the entrance to Mount Herzl. It is dedicated to the Third Temple. It was made in 2002 by sculptor Ben Zion Tzefoni.

Garden of the Nations

The Garden of the Nations is a public garden. It has been planted with olives trees by foreign leaders visiting Israel. Each tree is has a plaque with the name of the leader who planted it.

The Herzl Museum is a biographical museum. It tells the story of Theodor Herzl and his vision to create a Zionist country. The museum opened in 2005.

The memorial path was designed by the architect Uri Abramson and was built by Israeli youth organizations in 2003. It tells the story of the birth of the state of Israel, from the beginning of the Zionism until the declaration of the state. The path runs from the National Civil Cemetery to Yad Vashem.

Victims of Acts of Terror Memorial

The Victims of Acts of Terror Memorial is the main memorial for all victims of terrorism in Israel from 1851 until today. The Memorial was opened in 1997, and every year, a ceremony is held on the plaza of the memorial.

Garden of Those Missing in Action

The Garden of Those Missing in Action is a Memorial Garden in the National Military and Police Cemetery dedicated to people who have gone missing in action so that their burial place is unknown. It is also dedicated to the memory of unknown soldiers. In the garden there is a wall of names of people hwo have gone missing starting in 1914 until the present day. Beside it, empty graves represent missing soldiers and officers who have fought in the Israeli Defense Forces. 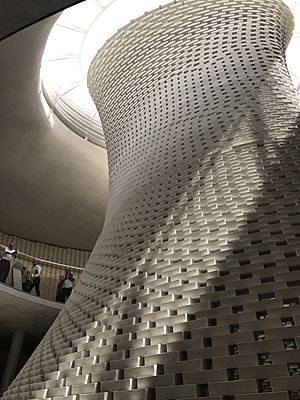 The National Memorial Hall For Israel's Fallen (Hebrew: היכל הזיכרון הממלכתי לחללי מערכות ישראל) at Mount Herzl in Jerusalem is an initiative of the Israeli Ministry of Defense to commemorate all military Israeli casualties of war and Jewish fighters from 1860 until today. The proposal to build the hall was announced by Defense Minister Ehud Barak in 2010.

In 2012, the Israeli government approved the establishment of the National Memorial Hall at a cost of $40 million. Certification has been delayed because of a petition to the court by families of terror victims. They say that there is no mention in the hall of the names of those victims, although the Hall is planned to be built next to the main memorial to Israeli terror victims.

Memorial of the Unknown Soldier

In the center of the hall is the eternal flame dedicated to the unknown soldiers of Israel. This means at least one unidentified set of remains is buried there so that the families of soldiers whose bodies were never brought back can go there, imagine it is their dead relative, and mourn.

An ancient Jewish burial cave from the Second Temple period was found in the military cemetery in 1954. Architect Asher Hiram designed a new entrance for the cave, so it is included in the cemetery.

All content from Kiddle encyclopedia articles (including the article images and facts) can be freely used under Attribution-ShareAlike license, unless stated otherwise. Cite this article:
Mount Herzl Facts for Kids. Kiddle Encyclopedia.