In January 2013, the Israeli government said it planned to build a wall along the eastern edges of the Golan Heights, on its border with Syria. 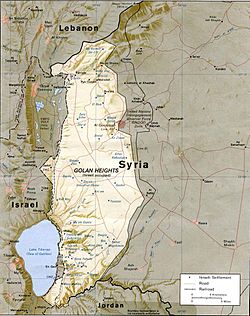 The area is hilly and elevated, overlooking the Jordan Rift Valley which contains the Sea of Galilee and the Jordan River, and is itself dominated by the 2,743.2 metres (9,000 ft) tall Mount Hermon. The plateau has an average altitude of 1,000 metres (3,300 ft) and an area totaling 1,800 square kilometres (690 sq mi), and straddles the boundary between Syria and Israeli-held territory. Elevations range from 2,814 metres (9,232 ft) in the north (if one considers Mount Hermon as part of the Heights), to below sea level along the Sea of Galilee and the Yarmuk River in the south.

The plateau that Israel controls is part of a larger area of volcanic basalt fields stretching north and east that were created in the series of volcanic eruptions that began recently in geological terms, almost 4 million years ago, and continue to this day. It has distinct geographic boundaries. On the north, the Sa'ar valley (Banias) generally divides the lighter-colored limestone bedrock of the mountains from the dark-colored volcanic rocks of the Golan plateau. The western border of the plateau is truncated structurally by the Jordan Rift Valley, which falls down steeply into the lake. The southern border is lined by the Yarmuk River, which separates the plateau from the Hashemite Kingdom of Jordan. Finally, the east end of Golan Heights is carved out by the Raqqad river (Wadi Ruqqad) and areas still controlled by Syria.

The plateau's north-south length is approximately 65 kilometres (40 mi) and its east-west width varies from 12 kilometres (7.5 mi) to 25 kilometres (16 mi). Topographically, the Golan Heights ranges in elevation from 2,814 metres (9,232 ft) on Mount Hermon in the north, to about 400 metres (1,300 ft) elevation along the Yarmuk River in the south. The Sea of Galilee, also known as Lake Kinneret or Lake Tiberias, at the southwest corner of the plateau is 200 metres (660 ft) below sea level. The steeper, more rugged topography is generally limited to the northern half, including the foothills of Mount Hermon; on the south the plateau is more level.

The broader Golan plateau exhibits a more subdued topography, generally ranging between 120 metres (390 ft) and 520 metres (1,710 ft) in elevation. In Israel, the Golan plateau is divided into three regions: northern (between the Sa'ar and Jilabun valleys), central (between the Jilabun and Daliyot valleys), and southern (between the Daliyot and Yarmouk valleys). The Golan Heights is bordered on the west by a rock escarpment that drops 500 metres (1,600 ft) to the Jordan River valley and the Sea of Galilee. In the south, the incised Yarmouk River valley marks the limits of the plateau and, east of the abandoned railroad bridge upstream of Hamat Gader and Al Hammah, it marks the recognised international border between Syria and Jordan. 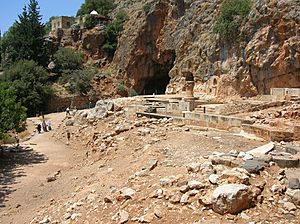 Temple of Pan at Banias

Geologically, the Golan plateau and the Hauran plain to the east constitute a Holocene volcanic field that also extends northeast almost to Damascus. Much of the area is scattered with dormant volcanos, as well as cinder cones, such as Majdal Shams. The plateau also contains a crater lake, called Birkat Ram ("Ram Pool"), which is fed by both surface runoff and underground springs. These volcanic areas are characterised by basalt bedrock and dark soils derived from its weathering. The basalt flows overlie older, distinctly lighter-colored limestones and marls, exposed along the Yarmouk River in the south.

The rock forming the mountainous area in the northern Golan Heights, descending from Mount Hermon, differs geologically from the volcanic rocks of the plateau and has a different physiography. The mountains are characterised by lighter-colored, Jurassic-age limestone of sedimentary origin. Locally, the limestone is broken by faults and solution channels to form a karst-like topography in which springs are common.

In addition to its strategic military importance, the Golan Heights is an important water resource, especially at the higher elevations, which are snow-covered in the winter and help sustain baseflow for rivers and springs during the dry season. The heights receive significantly more precipitation than the surrounding, lower-elevation areas. The occupied sector of the Golan Heights provides or controls a substantial portion of the water in the Jordan River watershed, which in turn provides a portion of Israel's water supply. The Golan Heights supply 15% of Israel's water.

All content from Kiddle encyclopedia articles (including the article images and facts) can be freely used under Attribution-ShareAlike license, unless stated otherwise. Cite this article:
Golan Heights Facts for Kids. Kiddle Encyclopedia.