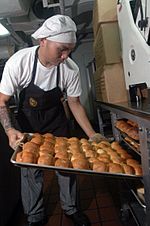 A bakery in Oslo

A baker is somebody who makes mainly bread. Some bakers also make cakes and desserts, but a traditional baker only makes bread. The place where a baker works is called a bakehouse or a bakery.

The first bread was made by the Egyptians in 8000 BC and in the Middle Ages most landlords had a bakery. They had a public oven and housewives brought the dough to the baker to cook.

Bread is now much sweeter than it was in the Middle Ages because a lot of corn syrup or honey is used. They baked lots of breads.

Since grains have been a staple food for millennia, the activity of baking is a very old one. Control of yeast, however, is relatively recent. By the fifth and sixth centuries BCE, the ancient Greeks used enclosed ovens heated by wood fires; communities usually baked bread in a large communal oven.

In ancient Rome several centuries later, the first mass production of breads occurred, and "the baking profession can be said to have started at that time." Ancient Roman bakers used honey and oil in their products, creating pastries rather than breads. In ancient Rome, bakers (Latin, pistor) were sometimes slaves, who were (like other slave-artisans) sometimes manumitted.

The Gauls are credited with discovering that the addition of beer froth to bread dough made well-leavened bread, marking the use of controlled yeast for bread dough.

In medieval Europe, baking ovens were often separated from other buildings (and sometimes located outside city walls) to mitigate the risk of fire. Because bread was an important staple food, bakers' production factors (such as bolting yields, ingredients, and loaf sizes) were heavily regulated. For example, Henry III of England promulgated the Assize of Bread and Ale in 1267, subjecting all commercial bakers and brewers to various fees in order to practice their trade and imposing various regulations, such as inspection and verification of weights and measures, quality control, and price controls. Soon after the enactment of the Assize, "baking became a very stable industry, and was executed much more professionally than brewing, resulting in towns and villages having fewer bakers than brewers." Because ovens were expensive capital investments and required careful operation, specialized bakeries opened. 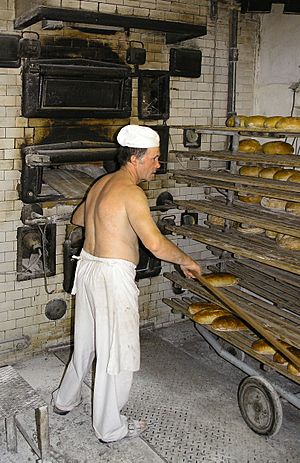 A traditional baker in Poland, removes fresh bread from an oven with a long wooden peel and places it on a cooling rack

Baker is an easily recognizable English surname of medieval occupational origin; Baxster is the female form. Equivalent family names of occupational origin meaning "baker" exist in other languages: Boulanger, Bulinger, Dufour, and Fournier in French, Pfister and Becker in German, and Piekarz in Polish.

According to the Occupational Outlook Handbook (OOH) published by the Bureau of Labor Statistics of the United States Department of Labor,

{{quote|Bakers typically do the following:

Bakers encounter a number of occupational hazards. OOH reports that bakeries, "especially large manufacturing facilities, are filled with potential dangers such as hot ovens, mixing machines, and dough cutters. As a result, bakers have a higher rate of injuries and illnesses than the national average. Although their work is generally safe, bakers may endure back strains caused by lifting or moving heavy bags of flour or other products. Other common risks include cuts, scrapes, and burns. To reduce these risks, bakers often wear back supports, aprons, and gloves."

Baker's asthma—commonly caused by flour allergens and the microbial enzymes (often Aspergillus-derived) used to facilitate breadmaking—is one of the common causes of occupational asthma worldwide.

All content from Kiddle encyclopedia articles (including the article images and facts) can be freely used under Attribution-ShareAlike license, unless stated otherwise. Cite this article:
Baker Facts for Kids. Kiddle Encyclopedia.