Lower East Side facts for kids 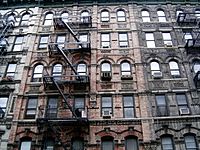 Tenements on the Lower East Side in New York City

The Lower East Side is a neighborhood in southeastern part of the New York City borough of Manhattan.

The neighborhood is roughly made up of Allen Street, East Houston Street, Essex Street, Canal Street, Eldridge Street, East Broadway, and Grand Street. It is considered to be an immigrant, working class area, but some parts of the neighborhood have been bought, repaired, destroyed, and renovated in recent years. Because of this, The National Trust for Historic Preservation put Lower East Side Manhattan on their list of America's Most Endangered Places At one time, much of the Lower East Side was tenements or slums, but many of these have been torn down or replaced by housing projects.

All content from Kiddle encyclopedia articles (including the article images and facts) can be freely used under Attribution-ShareAlike license, unless stated otherwise. Cite this article:
Lower East Side Facts for Kids. Kiddle Encyclopedia.