Jacob August Riis (May 3, 1849 – May 26, 1914) was a Danish-American social reformer, journalist and social documentary photographer. He is known for using his photographic and journalistic talents to help the impoverished in New York City; those impoverished New Yorkers were the subject of most of his prolific writings and photography.

Riis’ work was instrumental in bringing about New York State’s landmark Tenement House Act of 1901, which improved conditions for the poor.

Additionally, as one of the most famous proponents of the newly practicable casual photography, he is considered one of the fathers of photography due to his very early adoption of flash in photography.

While living in New York, Riis experienced became a police reporter writing about the quality of life in the slums. He attempted to alleviate the bad living conditions of poor people by exposing their living conditions to the middle and upper classes. 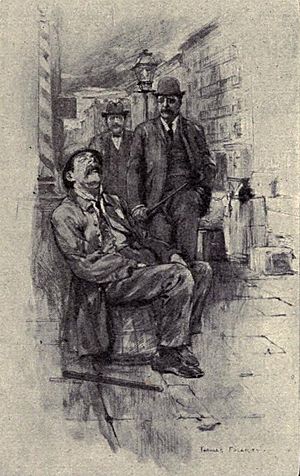 Theodore Roosevelt introduced himself to Riis, offering to help his efforts somehow. Upon his 1895 appointment to the presidency of the Board of Commissioners of the New York City Police Department, Roosevelt asked Riis to show him nighttime police work.

After reading the exposés, Roosevelt closed the police-managed lodging rooms in New York. Roosevelt was so deeply affected by Riis's sense of justice that he befriended Riis for life, later remarking, "Jacob Riis, whom I am tempted to call the best American I ever knew, although he was already a young man when he came hither from Denmark".

After Roosevelt became president, he wrote a tribute to Riis that started:

A particularly important effort by Riis was his exposure of the condition of New York's water supply. His five-column story "Some Things We Drink," in the 21 August 1891 edition of the New York Evening Sun, included six photographs (later lost). The story resulted in the purchase by New York City of areas around the New Croton Reservoir, and may well have saved New Yorkers from an epidemic of cholera.

Riis died on May 26, 1914. Riis's grave is marked by an unmarked granite boulder in Riverside Cemetery, in Barre, Massachusetts.

All content from Kiddle encyclopedia articles (including the article images and facts) can be freely used under Attribution-ShareAlike license, unless stated otherwise. Cite this article:
Jacob Riis Facts for Kids. Kiddle Encyclopedia.