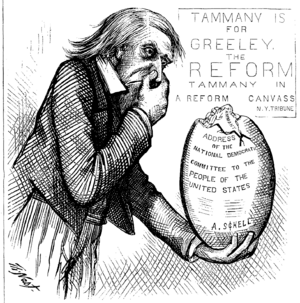 Cattoon of the Tammany rotten egg

Tammany Hall, (also called the Society of St. Tammany, the Sons of St. Tammany, or the Columbian Order), named for Tamanend (meaning "affable"), a Native American leader of the Lenni Lenape, was started in 1786 and was declared on May 12, 1789 as the Tammany Society. It was the Democratic political machine that played a major role in controlling New York City politics. It also helped many immigrants, especially the Irish, rise up in American politics from the 1790s to the 1960s. In 1858 William Marcy Tweed became its leader.

All content from Kiddle encyclopedia articles (including the article images and facts) can be freely used under Attribution-ShareAlike license, unless stated otherwise. Cite this article:
Tammany Hall Facts for Kids. Kiddle Encyclopedia.