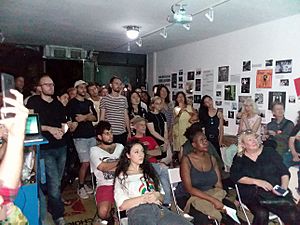 Guests enjoy an event in the Museum's lobby.

The Museum of Reclaimed Urban Space (MoRUS) is a not-for profit museum dedicated to archiving the history of community gardens, squatting, and grassroots environmental activism of the Lower East Side neighborhood of Manhattan, New York City. Located in the storefront of C-Squat at 155 Avenue C, the museum documents how neighborhood residents transformed abandoned spaces and lots in the neighborhood into squats and gardens. By preserving the neighborhood's history, the museum aims to educate and thereby empower communities and individuals to keep this form of sustainable, community-based activism alive.

During the 1970s recession, New York City cut back social services in many neighborhoods, which particularly affected the Lower East Side. Many landlords vacated their buildings, despite people still living in them, which lead to a large-scale diaspora from the neighborhood. The neighborhood was home to many artists, musicians, and activists. Residents actively resisted disinvestment on the part of the city and landlords, and instead of moving out, reclaimed these spaces. They repaired abandoned buildings, transforming them into communal living spaces such as homesteads, squats, and community centers. In these spaces the new residents held collective meetings, skill-shares, and workdays to manage these spaces, while vacant lots were transformed into community gardens that served as gathering places. The Museum of Reclaimed Urban Space was founded by Bill Di Paola and Laurie Mittelmann to preserve the history of New York City's Lower East Side and promote the local communities that came together in order to make the neighborhood a cultural icon on New York City. 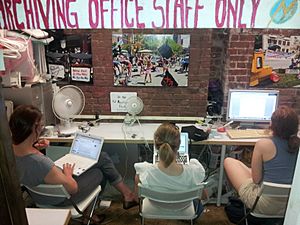 Volunteers work to preserve and protect the history of their neighborhood through archival work.

The Museum, founded by neighborhood activists in 2012, documents this history. It is located in the storefront of C-Squat, one of the few still-occupied squats on the Lower East Side. The Museum is “decidedly local,” run completely by local volunteers, and presents the neighborhood's history through a combination of exhibitions, walking tours, and events. Permanent exhibitions explore various themes aspects of the neighborhood's radical history, including sustainability, activist spaces, and the Occupy Wall Street movement. Rotating exhibitions have covered 1980s political street posters and stencils and the community garden movement; a current exhibition documents the punk movement and its politics. The Museum offers walking tours of the neighborhoods every weekend, which is another key element of its educational efforts. The tours lead participants around the neighborhood squats and community gardens, explaining their complex histories and struggles with developers and police over the control of urban space in the East Village. The tour guides are longtime neighborhood activists and historians. The museum also organizes garden workdays and workshops in the neighborhood's community gardens. Through these various activities and exhibitions, the museum “seeks to connect the neighborhood’s history of activism with the principle of sustainability.”

All content from Kiddle encyclopedia articles (including the article images and facts) can be freely used under Attribution-ShareAlike license, unless stated otherwise. Cite this article:
Museum of Reclaimed Urban Space Facts for Kids. Kiddle Encyclopedia.