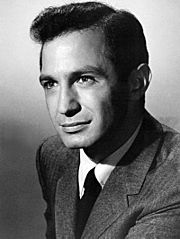 Gazzara was born on August 28, 1930 in New York City, New York. He was educated at the Actors Studio and at The New School. Gazzara was married to Loiuse Erickson from 1951 until they divorced in 1957. Secondly he married Janice Rule from 1961 until they divorced in 1979. Gazzara lastly married Elke Krivat from 1982 until his death in 2012. Gazzara died on February 3, 2012 from Pancreatic cancer, he was 81 years old.

All content from Kiddle encyclopedia articles (including the article images and facts) can be freely used under Attribution-ShareAlike license, unless stated otherwise. Cite this article:
Ben Gazzara Facts for Kids. Kiddle Encyclopedia.