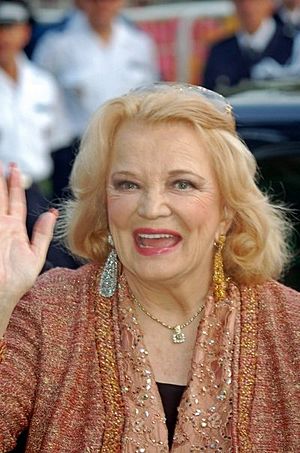 Gena Rowlands (born June 19, 1930 in Madison, Wisconsin) is an American actress. She has gotten several Golden Globe and Emmy Awards. She starred opposite Robert Lansing in The 87th Precinct as a woman who was deaf. She also acted in the 1980 picture Gloria as the title character. She was married to director John Cassavetes until his death in 1989. They had three children.

All content from Kiddle encyclopedia articles (including the article images and facts) can be freely used under Attribution-ShareAlike license, unless stated otherwise. Cite this article:
Gena Rowlands Facts for Kids. Kiddle Encyclopedia.