John Nicholas Cassavetes (December 9, 1929 – February 3, 1989) was a Greek-American actor, film director, and screenwriter. Cassavetes was a pioneer of American independent film, writing and directing over a dozen movies, which he partially self-financed, and pioneered the use of improvisation and a realistic cinéma vérité (a style of documentary film-making). He also acted in many Hollywood films. His income from acting made it possible for him to direct his own films independently.

Cassavetes was nominated for three separate Academy Awards: Best Supporting Actor for The Dirty Dozen (1967), Best Original Screenplay for Faces (1968) and Best Director for A Woman Under the Influence (1974). 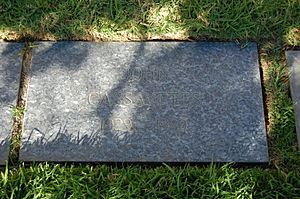 Cassavetes was born in New York City, New York on December 9. 1929. He studied at Blair Academy and at Colgate University. Cassavetes spent his childhood in Long Island, New York. He was married to Gena Rowlands from 1954 until his death. They had 3 children.

Cassavetes died from cirrhosis of the liver on February 3, 1989, at the age of 59, caused by many years of alcoholism. He is buried at Westwood Village Memorial Park cemetery in Los Angeles. The New Yorker wrote that Cassavetes "may be the most influential American director of the last half century".

All content from Kiddle encyclopedia articles (including the article images and facts) can be freely used under Attribution-ShareAlike license, unless stated otherwise. Cite this article:
John Cassavetes Facts for Kids. Kiddle Encyclopedia.